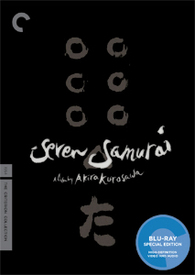 The seemingly socialist credo that states, “In war, by protecting others, you save yourself,” is a point that’s pronounced not only through the reflective, reiterative rhetoric of overseeing samurai Kambei Shimada (Takashi Shimura) but also in the cause-and-effect nature of the interactive schemata indwelling Akira Kurosawa’s Seven Samurai.  Saturated in social sphericity in the way that everything that goes around comes around – which includes the effects of past transgressions on today’s perceptions, a notion that’s affectionately articulated through the monologue of fiery faux-ronin Kikuchiyo (Toshirô Mifune) – Kurosawa’s seminal action opus is a work that, by today’s masculinely dismorphic standards, is far too conscious of its principles’ drives to be classified in the very genre it aggregately inspired.  Of course, we can trace many of the now-prosaic motifs of contemporary cinema to Kurosawa’s work, but to accredit him as their sole innovator is to revel in imprudence.  With Seven Samurai, the Japanese auteur more-so-assembled-than-conceived a circle of stimuli that’s tasked with evoking our inborn lust for survival while still paying heed to the exultant excesses that we call culture – characters are systematically stricken with the crisis of deciding whether or not life is worth living if it means breaking the very tenets that dignify us as a people.

It may be because I have a tendency to look for atheistic airs in everything, but I found it amusing that, upon hearing about the impending raid of their village, the farming community around which the picture centers wallowed ruefully as to why god had forsaken them.  And while I doubt Kurosawa intended this as a stigmatization of spirituality at large, it does assuredly exemplify the uselessness of prayer in comparison to enterprise.  Rather than having those inhabiting the hamlet simply accept their fate, the director posits an emphasis on effort – and communal synergism – that gives the audience a reason to express concern for their plight.  Of course, the relative amorality of the bandits is also to be considered, though the film is still imbued with a sense of ethical ambiguity.  Kurosawa infixes his work with such an understood essence of social cause-and-effect that it becomes difficult to discern, if you’ll pardon the simplicity, good from bad, right from wrong.  But in lieu of this omnipotent incertitude, Samurai’s thematic temper denotes an investment in perpetuation and self-preservation – a considerably optimistic attestation to the inevitable joys of life that at times seem insensible.

Despite the intensity of luminosity demonstrating inconsistency and the ineludible appearance of some scratches (both due to agedness of its several source prints), this release marks another excellent high-definition transfer by Criterion, particularly when camera and character alike are thrown into kinesis.  Contrast levels are strong and exhibit both deep blacks and piercing whites, an attribute that's especially evident during the rainy sequences that tonally exploit the idyllic sheen of light reflecting off of water against the carnage to come from a foreshadowed fracas.  A gamut of grays also greets the viewer, according a natural complexity that's rarely seen in restorations from this era.  The audio track even exudes discernibly dynamic distinctions between dialogue, effects, and score and, besides an inconspicuous hiss, exhibits great clarity and stability.  If anything, I'm slightly more impressed by the audial accompaniment of this release, at least in comparison to Criterion's treatment of the similarly aged and recently released The Magician, though I feel that the visual representation of Bergman's film comes across as more crisp.  Regardless, this is another definitive output of restorative proficiency.