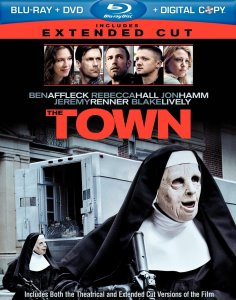 Whether or not a shift in moral disposition necessitates geographical relocation would be the central sociological inquiry of The Town if sophomore director Ben Affleck had actually bothered to ask one.  Rather, his film stands as a one-sided statement on the weight of anchors both chummy and familial, positing that such social burdens only attenuate personal furtherance.  And although I too can understand, even empathize with, the concept of environmentally integrated obligation, I’m more than a little weary of how Affleck presents it:  The incessant aerial framing of the Boston skyline, and its perceptually progressive, electric glow, positioned atop the less luminous Charlestown projects in which the picture’s set, seemingly suggests that socioeconomic asymmetry is a catalyst to crime that threatens an entire neighborhood.  (Its flighty dealings with gentrification via its "Townies" v. "Tunies" dynamic also suggests a terse endemic divide that's presented with more ostensibility than weight.) Granted, the picture is bookended by information regarding Charlestown’s criminal reputation – first labeling it as refuge for more bank robbers per capita than any other area in the country, later commending the upstandingness of the majority of its citizens – but fails to delineate the titular locale’s problem past immaterial exemplars of drug trafficking and abuse, intergenerationally institutionalized criminal lifestyles, and, accordingly, all-encompassing class stagnancy.  Thus, the emotional ballasts that the picture bestows its characters aren’t substantial enough to guide their more affecting outbursts away from trivializing territory, which may or may not justify Affleck’s continual incorporation of self-reflective genre go-to’s (one criminal giving it all up for the sake of love, one trigger-happy-but-sentimental gunman, and an authoritative presence willing to break all the rules to catch his man).  Still, with his own name atop the kiosk instead of his less-bankable, but better acting, brother Casey, and up-and-comers Jon Hamm and Jeremy Renner receiving supporting billing, The Town banked an impressive $91.9 million domestically, hitting as many as 2,935 screens in the process.

A regressive follow-up to his surprisingly considerate debut, Gone Baby Gone – which more ambitiously than artistically alluded to ecological agency by employing shot/countershot examples of actors’ conscience-addled faces and the crime-addled streets of its Dorchester milieu – Affleck’s second-effort is less concerned with exposition and humanism than it is heist-flick ascription.  While his previous work at least amicably tried to flesh out the nature v. nurture quandary surrounding its story, The Town often overpowers its quieter, more intuitive moments in favor of ferocious fusillades or other, equally masculine, visceral spurts.  Problem is, though, Affleck isn’t incredibly adept at framing action.  Despite wisely eschewing the relentlessly obstructive, and lazy, shaky cam, The Town’s heist, chase, and shootout sequences lack both spatiotemporal awareness and discernible identity, with firefights in particular offering unintentional, almost-Godardian breaches in continuity.   Still, an effort toward lucidity is made, and Affleck can be accredited with the small feat of choreographing combat better than Christopher Nolan in 2010 (Inception’s hallway scene notwithstanding).  And although most of the story is an aggressive retread of movies past, his attempted immixtures of contemporary commentary and familiar sub-genre flourishes are refreshing despite their manufactured essences.

But Affleck gets a bit too confident as he begins to subvert the picture’s good/bad, cop/robber dichotic morality in order to justify his own character’s social and ethical salvation.  Earlier in the film it’s made clear that Affleck’s Doug MacRay is to be held in higher regard than his best friend James “Jem” Coughlin (Renner), as the former doesn’t drink alcohol or bludgeon witnesses with firearms and the latter, well, does.  In a way, the ying-yang personas of these principals actually embody different tangents of a once unified temperament, drifting apart from each other as their perceptions of the future become exponentially opposite.  Doug wants something better than their current life of robbing banks and armored cars, and longs for an all-too idealistic escape to a place that’d reunite him with his wayward mother.  Jem is perpetually pugnacious, his penchant for violence becoming an increasingly dominant characteristic as he further concedes his chances for amelioration.  Of course, this relationship allows for many of the film’s in-group conflicts to be shown as being both culturally and cognitively derived, and this perceptional bipartisanship makes a decent enough statement about the ambiguous amount of control we have over our directional growth.  But in spite of such Soc-101 postulating, Affleck crafts the characters with too much rigidity, reducing their fates to overt inevitabilities.  Rather than present their relationship and eventualities as being symbiotically cryptic, especially given that both have been committing felonies, together and apart, for the greater portion of their adult lives, The Town simultaneously asks us to root for MacRay’s survival while hoping for Coughlin’s slaying.  Just as Affleck tries to paint the picture’s emblematic officer, FBI Agent Adam Frawley (Hamm), at the same level of abjection as the film’s criminals – paralleling the way he pressures a young mother (Blake Lively) with filial separation to the way a crime boss (Pete Postlethwaite) uses MacRay’s missing matriarch to bring him aboard a job – the movie makes mess in combing the emotive and ethical elements of its cardinal discord, trading in sagacity for more abrasive evocations.  Throw in an awkward Shawshank Redemption narrative nod, and you essentially have The Town:  a slickly inane assimilation of the borrowed ensconced in a modish Bostonian veneer.

One of the better contemporary Warner Bros. restorations, The Town holds up remarkably well on Blu-ray despite housing two transfers within a single disc.  Both are comparably gratifying, offering a fine, natural looking grain structure that’s free of any meretricious manipulation such as DNR and skin tone adjustments.  Fine object detail is rife with texture and the pitchy eyes of the team’s early Grim Reaper garb looks startlingly vacant when cropped by the coarsely detailed, green skull masks.  Moreover, the variably monochromatic filtering of Robert Elswit’s photography gives each scene a discernable feel that doesn’t disparage its overall aesthetic synergism.  Better yet is the audio track, which is more or less showcase worthy.  The sound track explodes during bursts of automatic gunfire and vehicular collision while retaining a markedly crisp stability that is as well designed and allocated as anything I’ve heard all year.