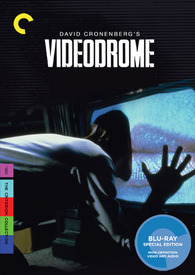 The inevitable fusion of malleable flesh and technological furtherance has been an intermittent interest throughout David Cronenberg’s career, with the director’s oeuvre offering a handful of body horror based films that employ increased automation as a means to sensorial subversion.  But films like The Fly, eXistenZ, and, of course, Videodrome, hardly portend scientifically derived doom; rather, they posit bodily change, and the perceptional permutation that follows, as one of the more terrifying ordeals that humans can endure.  Through these works, Cronenberg shows that our psychological make-ups are mostly concessions of physical phenomena – that our realities are defined by our accrued experiences with environmental stimuli, and that any disruption of our senses is going to be horribly addling.  Armed with this ideology and Cronenberg’s cultural acuity, Videodrome is as much an assay on amplifying interpersonal disconnect as it is a look into our societal fascination with overstimulation.

Of course, the technological revolution would not be, as predicted here, televised.  Videodrome’s implicitly futuristic, morally dystopian Toronto is a world that puts forth a now antiquated ideology that television will become the communicative cornerstone of the future.  But while it’s easy to criticize Cronenberg and his film for not foreseeing the prominence of other outlets of information sharing, Videodrome remains relevant in the way it presages apathetic increases due to increasingly virtual interaction; moreover, how this broadening social chasm only amplifies our species’ more fetishistic applications of sex and violence.  The film’s best scenes, though, carry a self-reflective, almost parodic air in dealing with such agents of arousal and the public perception thereof:  seeing a guttersnipe in a Cathode Ray Mission watching a televised male masturbate, his face fixed in a “What, this is normal!” look, is equal parts laughable and, by today’s standards, eerily accurate.

And yet, this is not Cronenberg’s first foray down such avenues (nor would it be his last), as his works are often instilled with a certain curiosity regarding savagery and sexuality, especially as extensions that override basic instinct.  His inquiring into these matters seems to question our own:  what makes carnality so intrinsically compelling?  In Videodrome he toys with hetero insecurity by playing upon a penetrative phobia – a motif he explores with more role-reversing ticklishness in 1999’s eXistenZ.  But rather than turn this into a polemic of sexual convention, Cronenberg uses it as a tongue-in-cheek trope for the absorbency of intangibles, for the film’s use of unconventional insertions – cassettes being thrust into vaginal-shaped chest cavities, needles piercing skin for purposes of pleasure, weaponry being fused to flesh – mirrors the aggressiveness of people cognizing threatening ideologies.  Naturally, this comes full circle with the running theme of televised culture, though in a matter that calls into question the motives of its perpetuators rather than the interest of the consumer.

When small-time network president Max Renn (James Woods) – a man whose perceptional compass defines the film's formalism – is asked in a television interview why his station’s programming peddles pornography and gore, he answers with flippant immediacy that it’s merely a matter of supply-and-demand economics.  Moments later he attests it’s a harmless outlet that accords social catharsis.  Whatever the case, there’s a political air to his answer that only underscores his ignorance.  In this, Cronenberg implores his audience to call to mind artisan intention in cases of viscerally overpowering agencies, suggesting that there’s always a dormant cause to our actions that may only exacerbate should we choose to neglect it.  Whereas Max is told that his smut is harmless due to a lack of philosophy, I wonder if Cronenberg actually believes the opposite or, rather, suggests, at least implicitly, that evocations cannot be arbitrarily derived.  Granted, not all of the film's thematic tangents seem directionally germane and, sure, its dialogue and surrealist flourishes can oftentimes make it a bit of a decadal quintessence, but Videdrome endures as a challenging work, one that’s far more edifyingly intuitive, and arrestingly evocative, than it is epochally outdated.

The paradox inherent to examining the high-def treatment of Videodrome lies in the how much of the movie is told through television screens of 1980’s quality; the difficulty lies in interpreting the restorer’s interventions in realms of aesthetic appropriateness whilst avoiding instances of augmentation.  As expected, this Criterion release lives up to the standards of its name by boasting a strong grain structure that gives the picture a desirable, filmy quality that doesn’t over-polish its concessional moments of TV fuzziness.  And, despite a penetratingly dark ambiance – save the scene at the impossibly luminous Spectacular Optical convention – detail still gleams through in enough abundance to showcase texturing unforeseen since its theatrical run.  At times, I found that such clarity renders the effects a bit obvious, though this is as much a celebration of the transfer as it is anything else.  Audial concerns are both consistent and stable, offering some depth and dynamicism but not to the point of acoustic caricature.

Long live (this conflation of) Criterion, Videodrome, and the New Flesh!