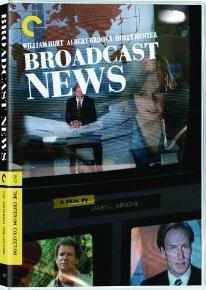 In 1983, James L. Brooks proved beyond a shadow of a doubt that his success on television with The Mary Tyler Moore Show and Taxi was only the beginning. The writer/director's film adaptation of Larry McMurtry's novel Terms of Endearment was a huge box office success—$108.4 million domestically, or $270.2 million when adjusting for inflation—and it won Academy Awards for Best Picture, Director, Actress, Supporting Actor and Adapted Screenplay. Yet it wasn't until 1987 that Brooks made what stands as his finest work: Broadcast News.

Broadcast News is a movie that doesn't feel the need to hit you over the head with its message, but it definitely has a powerful one. On the surface, it's about a love triangle among three professional television journalists: Holly Hunter's Jane, the workaholic producer; Albert Brooks' Aaron, the too-smart-for-his-own-good reporter and William Hurt's Tom, a prime example of success born out of good looks and emphasizing superficiality. Aaron and Jane are great friends with a palpable sexual tension bubbling right underneath their friendship, but Tom throws off that chemistry when he comes to work at their bureau. Jane is drawn to Tom on a physical level even though what he represents professionally makes her want to vomit. Brooks allows these characters to bounce off each other in a way that feels wholly organic. Even though every line in the film is crafted to perfection, nothing seems forced or staged.

Brooks shows that the death of serious reporting begins on a personal level. If Jane chooses Tom, she'll have to ignore every bit of professional integrity that helped her get to where she is. Yet that professional integrity also makes her miserable. Jane has moments where she simply bursts into tears, which shows how Brooks can expertly play a serious moment for laughs. The sad reality is that Jane's dilemma belongs to every person who wants to stay informed about our world. Do we pay attention to all the sensational crap about starlets going to rehab or do we devote our time to more serious matters? It's often too easy to gobble up the sensational stuff.

It's both remarkable and scary that Broadcast News remains relevant 23 years later. Just look at how major networks handled Chinese President Hu Jintao's visit to America. Jintao says that the dollar-dominated world is a "product of the past," but that's obviously not as important as the pandas that China gave us as a gift or the dress that Michelle Obama wore to the state dinner. Is Snooki available for a comment about Jintao?

Putting aside its pitch-perfect commentary about the state of the media, Broadcast News is still an excellent romantic comedy. When he's on his game, Brooks ranks right up there with Billy Wilder in terms of staging character-driven humor. Take for example a scene in which Aaron calls an assistant director (played by Joan Cusack) an ass-kisser. She replies, "My gosh ... and for a while there I was attracted to you." Aaron shoots back, "Well, wait a minute, that changes everything!" Classic.

The folks at Criterion have once again assembled a package that is essential for any true fan. A new documentary, James L. Brooks—A Singular Voice, provides plenty of worthwhile insight into the writer/director's career. The doc wisely skips over duds such as I'll Do Anything, Spanglish and How Do You Know.

A video interview with CBS producer Susan Zirinsky shows the striking similarities between Zirinsky and Jane. Brooks obviously did his homework.

Fans who have seen the film dozens of times will cringe when watching an alternate ending that was mercifully left on the cutting room floor. Brooks provides commentary after seeing the scene for the first time himself.