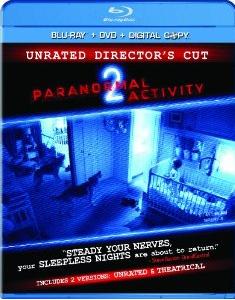 PA2 defies expectations, managing to be both a prequel and sequel while excelling on both fronts.

The story follows Kristi (Sprague Grayden), the sister of the woman under ghostly assault in the original. Kristi‘s husband Daniel (Brian Boland) installs security cameras in their home to protect their infant son after burglars ransack their home.

Or was something more sinister the culprit?

Those cameras become the audience's point of view for more haunted house theatrics, conducted with flair by director Tod Williams (The Door in the Floor). Adding a baby into the mix may sound like a cheap way to gin up the emotional stakes, but it works all the same.

The lone Blu-ray extra of note is some "found footage" dealing with the sudden disappearance of baby Hunter.

You Again does more than waste Hollywood's new "It Girl," Betty White. It leaves a serious dent in Kristen Bell's fledgling film career.

Bell plays Marni, a former high school geek who learns her brother is marrying the girl who once tormented her at the school yard. Meanwhile, Marni's mom (Jamie Lee Curtis) reunites with her old school chum (Sigourney Weaver) after years of estrangement.

That farcical setup yields few laughs but plenty of strained slapstick. Leave it to White to steal the movie's sole flash of wit - name dropping social media sites like a gum-snapping teen.

Curtis and Weaver share one quality scene together, the two of them treading water in a pool, their vanity and egos laid bare.

Old pros like Weaver, who avoids the caffeinated mugging the rest of the cast embraces, can walk away unscathed from You Again. Not Bell. She's heavy handed when she should be nimble, coarse when the moment calls for tenderness.

The Blu-ray extras include a hokey "Ask the Cast" segment which has the leads setting up White for punch lines, a Blooper Dance Party and deleted scenes which are mostly as bland as the feature film itself.

Luke Wilson is carving an awkward niche out for himself—starring in low-key charmers which head more or less straight to home video.

Last year he gave us "Tenure," a droll college comedy which got ignored by the masses. Now, he's starring in Middle Men, the mostly true story of a man who helped connect lonely men to their Internet-fueled desires.

Wilson stars as Jack Harris, a happily married man with a knack for bringing people to the business table with very little fuss. When he hears about two less than balanced business men (Giovanni Ribisi, Gabriel Macht) with an Internet scheme he decides to lend them his talents.

Jack's life is like a Norman Rockwell painting - he tells us as much via his narration. So why he goes to some pretty dark places so quickly doesn't quite add up. Wilson's middle name should be Everyman, but he's less convincing whenever Jack stands up to the crooked characters around him. He nails the peacemaker part of the performance, but he can't convey the sense of menace - and lousy decision making - that are part of his character's DNA.

There's plenty of "only in America" moments here, and Jack's fall from grace provides shrewd commentary on both on our capitalist culture and the very nature of man.

Highly stylized and often entertaining, Middle Men isn't perfect, but it's a perfectly acceptable rental for those who think only bad movies rocket straight to home video.

The Blu-ray extras include deleted scenes, outtakes, an audio commentary track by director George Gallo, editor Malcolm Campbell and Cinematographer Lukas Ettlin, and a short "Slap" montage highlighting some of the film's more aggressive confrontations. Mobster whackings can be gruesome, but a nice slap is both punishing and a wee bit funny.

The 2010 remake of I Spit on Your Grave is everything you'd want in a reboot. Better acting. Richer characters. And all the modern-day improvements to cinema, from special effects to the overall look of the film.

The new film still won't be enough to sway those alarmed by the film's sexual violence. Grave 2.0 actually dials back some of the exploitation of the infamous rape scene, but it makes up for it by cranking up the tortures devised by our heroine.

The setup is virtually the same. A big city girl named Jennifer (Sarah Butler, as beautifully fragile as original Grave actress Camille Keaton) heads out to the middle of nowhere to work on a novel. She bumps into some hooligans at a local gas station who decide to pay Jennifer a harrowing visit shortly thereafter.

The new Grave offers deeper context than the original, from a whiff of class envy to some easily bruised male egos. The bows to our modern age amount to a bad guy obsessed with video taping the sordid action, and the manner in which Jennifer seeks revenge. Let's just say ol' Jigsaw would stand up and cheer at her nefarious devices meant for maximum payback.

The villains in this new Grave aren't one dimensional, and the worst of the lot is given a wife and an adorable teen daughter which makes Jennifer‘s revenge more complicated.

The Blu-ray extras include deleted scenes, a commentary track by director Steven R. Monroe and producer Lisa Hansen and a behind-the-scenes featurette.

Tags: Middle Men, Paranormal Activity 2, I Spit on Your Grave, You Again
Print