The Double Life of Veronique 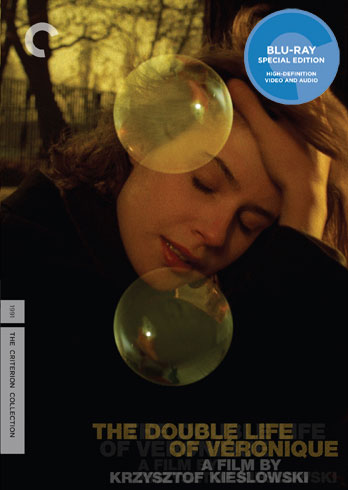 As individuals, we fancy ourselves something unique—and in many ways we are—though we must still be wary of the world that extends beyond our own perceptions as well as the social overlaps that affect, and are caused by, our actions.  With The Double Life of Véronique, Polish filmmaker Krzysztof Kieslowski offers an entreaty on recognizing this inevitability of interactive coalescence by crafting a work that puts forth drastically different outcomes for a life of sensationistic tendency versus one of more considerate, utilitarian vocation.  But despite the director’s own inclination to believe in intangible influences, The Double Life of Véronique reads as more of a reverie on the universalities that define the human experience than a proposition of spiritual indoctrination.  Keeping this in mind, we can observe the eerily identical lives of impudent Weronika and circumspect Véronique (both played with a delicate, but different, sense of genuineness by Irène Jacob) as well as their accordantly opposite fates through filters of both enigmatic and humanistic consideration.

Following a prologue meant to imbue the work with a fairytale’s sense of parabolical ethereality, we meet Polish Weronika in the midst of exercising her love of sensorial experiences; singing with a choir outdoors, she holds her ground and blithely intones her notes even as a rain breaks and her contemporaries scatter.  Through this and the myriad examples of her sensual ascription that ensue, we learn that Weronika’s Acchillean flaw is not the heart condition with which she so suffers but, instead, her naïve lust for immediacy.  But Kieslowski’s smatterings of subjective cinema and interjections of seraphic scoring—which brilliantly convey a perspectivist cognizance through both the POV shots and orblike ocular flourishes of DP Slawomir Idziak as well as the exquisite transience of Zbigniew Preisner’s operatic score—seem to extend an understanding, even acceptance, of individual perception rather than act as a condemnation one’s joie de vivre; the way in which he rhymes Weronika’s buoyant contentment with beauteous imagery and hints of determinism suggests that the Polish great empathizes with the hardships inherent to changing one’s life course.

But by thematically acknowledging, and formally alluding to, the friction between our romantic notions of free will and our dependence on social catalysts, Kieslowski is, I think, most focused on creating a world of intuitive and interactive ambiguity with this particular piece.  Though the titular character and her temerarious other initially appear to be identical entities, I wonder how much of this is meant to evoke the effects of human ecology and evince the notion that, although we’re all, by genealogical and sociological defaults, sui generis, it’s the choices we make in shared situations that instill us with an earned sense of identity.  In this, The Double Life of Véronique evolves into something more than a transcendentally laced account of two women whose circumstances diverge because one accepts and the other eschews perspicacity – it becomes a narratively germane and tonally ominous encapsulation of our often-unconscious, permeable connection to each other as a people.

Fitting of the film’s textural and sensorial emphases is this strong Criterion Blu-ray transfer.  A weighty grain pervades the imagery, allotting the picture’s florid and virent aesthetic essentiality both mesmeric depth and exacting fine object detail.  I find that, occasionally, more aphotic instances tend to up-shift noise levels a noticeable amount, though never to the point of gravelly distraction.  On the contrary, the visual conceptualization put forth by Idziak exudes a certain comforting warmth, as his prominent employment of filters often gives way to strikingly high color chroma.  Of course, because Véronique is a work that’s saturated in music and musical culture, it’s only fitting that this DTS-HD Master Audio 2.0 track be as resoundingly stable and dynamic as it is.  From the choral embellishments to the effects of audial minutia, the film now rings with an immersive power, even in its quieter moments.

“Kieslowski often said…” is more or less the running theme here, as this Criterion trove of extras offers a score of interviews and featurettes that inculcate the filmmaker’s personal philosophies, rather than the reactions and interpretations of his collaborators, as a way to habituate its viewers with his artisan temperament.  Whereas Kieslowski–Dialogue offers a feature-length look into the making of Véronique—complete with thematic disclosures from director himself—1966-1988: Kieslowski, Polish Filmmaker gives perspective, and gravity, to the sociopolitical climate in which his artistic talents augmented.  The interviews with Idziak, Preisner, and Jacob also append the work well, as their recounts oftentimes paint Kieslowski’s approach as communally harmonic – an attribute, and attitude, that further expands upon the way Véronique’s elicits eulogistically in regard to empathy.

Tags: The Criterion Collection, The Double Life of Veronique
Print