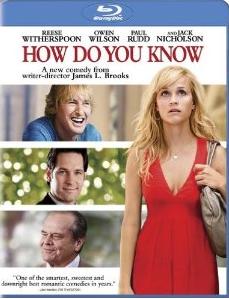 Few screenwriters can match James L. Brooks for memorable dialogue. And Brooks' latest film, How Do You Know, teems with more quotable lines to add to his movie canon. So why don't we care about the protagonists in the film, brought to life by a genuinely all-star cast?

Paul Rudd stars as George, an executive facing prison time for a crime he may not have committed. He's distracted by the beautiful Lisa (Reese Witherspoon) a U.S.A. softball member cut loose from the national team. But Lisa inexplicably falls for Matty (Owen Wilson), a major league hurler who prefers to treat women like disposable cutlery, just use and toss aside when done.

A bumpy love triangle emerges, all the while George's father (Jack Nicholson) may be able to keep his son out of the clink.

Brooks' past victories, like Terms of Endearment, mined the endless depths of the human condition. But very little found in How Do You Know feels genuine. Gamers like Rudd and Wilson can't revive the inauthentic storyline, but they fare better than Witherspoon. She's lovely as an aging athlete, but she's too coarse to believe these two men would drop everything for her.

The Blu-ray extras include "Extra Innings," a peek behind the scenes of the film revealing Brooks' obsession with story research. Witherspoon spent hours on the softball diamond working with actual softball players to hone her character's physical attributes. The deleted scenes allow Brooks to describe why the various moments weren't right for the finished film. A blooper reel feels like it's just getting warmed up when it suddenly ends.

Skyline clearly missed its calling during its brief theatrical release. The alien invasion feature is destined for cult status. Audiences can‘t watch uber-clunkers like Troll 2 and The Room forever.

The Brothers Strause, the duo who foisted Alien vs. Predator: Requiem on an unsuspecting public, whip up another stinker of epic proportions. The film focuses on a gaggle of humans who manage to survive the first wave of an alien invasion. That micro-approach might have worked if the survivors were even remotely appealing.

Jarrod (Eric Balfour) is visiting his old friend Terry (Donald Faison) in LA when aliens interrupt their reunion. The beasties beam a powerful blue light over the city, and if you look at it too long you're sucked into the alien's mother ship.

It's up to Jarrod, Terry and their significant others to duck those nasty lights and stay one step ahead of the alien ground troops wiping out everyone in sight.

The Strauses cut their teeth on special effects, and the alien creatures depicted here are dutifully rendered considering the modest sticker price—around the $20 million mark. Everything else is a debacle, from stone-faced acting to dialogue that veers from the flat to laughh out loud funny.

The film's coda offers a bleak science fiction vision that feels ambitious were it not delivered in such a stupefying fashion.

The Blu-ray extras include some negligible deleted, alternate and extended scenes. The best extras involve snippets of Pre-Visualization, or "pre-vis," animated storyboards that helped the directors get the project in under budget. It's a fascinating glimpse into how technology can help filmmakers bring their vision to life without breaking the bank.

Director Rob Reiner captured the uneasy balance between childhood and adolescence in the 1986 film Stand By Me, the now classic drama about four inquisitive boys searching for a dead body.

Based on a Stephen King novella, Stand By Me brims with late ‘50s era chart toppers and period details that feel swiped from a time travel machine.

Seen anew, Stand By Me feels slightly manufactured, from the aggressive put-downs uttered by the leads to the dramatic bullet points arranged so neatly for our amusement. The young actors corral those outsized emotions all the same, particularly River Phoenix, and Reiner captures the awkward beauty of teen friendships in a way no movie has managed since then.

The film's bittersweet ending is darn near perfect, as the narrator (Richard Dreyfuss) wistfully looks back on a trio of friends without peer.

The Blu-ray edition includes a mini reunion of Reiner, Corey Feldman and Wil Wheaton, who spend the bulk of their initial time together congratulating fellow cast mate Jerry O'Connell for marrying Rebecca Romijn. They eventually settle in for a picture and picture commentary track where they discuss the acting games that help forge their on-screen bond. In "Walking the Tracks: The Summer of Stand By Me," an older featurette, Reiner and King share their personal connections to the novella and, later, the movie.

Tags: How Do You Know, Skyline, Stand By Me
Print