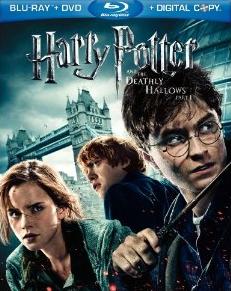 The Harry Potter franchise has proven not just freakishly popular but consistently entertaining. Each film seems to grow richer and more profound as an older, wiser Harry suffers through adolescence and the growing threat posed by Lord Voldemort (Ralph Fiennes).

Yet Harry Potter and the Deathly Hallows: Part 1 is the weakest entry in the series, a ramshackle road movie that feels more like a place holder than certified franchise installment.

Hallows begins in raucous style, as Harry (Daniel Radcliffe) is forced to flee a Death Eater assault in desperate fashion. Once safe, he reunites with old pals Ron and Hermione (Rupert Grint and Emma Watson) to find the horcruxes, the tiny slivers of Voldermort's soul which could be used to squash the villain's powers.

The second-to-last Potter film offers a growing sense of dread and isolation, but the action quickly recedes for us to endure the three teen friends bickering over petty jealousies as well as their different plans to defeat Voldemort.

Most of the film's flaws can be forgiven once you peruse the copious extras included in the Blu-ray version. Not only do Potter fans get a sneak peek at the final chapter in the series, they also can watch some of the films' stars bond on the golf course, check out the Wizarding World of Harry Potter theme park attraction and catch up on the previous story chapters with members of the cast.

Harry Potter and the Deathly Hallows: Part 1 comes out on April 15.

Gwyneth Paltrow sure can sing, a point she proves over and again in the new honkytonk drama Country Strong. What the Oscar winner can't do is prevent an upstart with a gravelly baritone from stealing a movie out from under her.

Paltrow plays Kelly Canter, a country superstar trying to clean up her act in rehab. Her husband-slash-promoter (Tim McGraw) sets up a comeback tour before she's emotionally ready for the road. His plan is to surround Kelly with young talent to take some of the weight off of her. But by hiring the handsome Beau (TRON: Legacy's Garrett Hedlund), who got to know Kelly during her rehab stint a little too well, the plan may backfire in spectacular fashion.

Country Strong delivers that Nashville sound in a form even rock ‘n' roll fans will hoot and holler over, but the film establishes Kelly's superstar chops far too late. So our sympathies shift over to Beau, and Hedlund ends up carrying the film's emotional load. He's also a pretty convincing singer, crooning his own tunes and charming the tight jeans off of the pretty tour opener (Leighton Meester).

The film's final reel is one soapy mess, but country music fans may be more forgiving of its storytelling pratfalls.

The extras include deleted scenes, a peek at the costumes behind the film and a satisfying close-up of the film's cast. More than one Country Strong actor looked to Johnny Cash for inspiration, but both Paltrow and Meester also studied Faith Hill and Dolly Parton to shape their performances. Meanwhile, Hedlund lived at McGraw‘s ranch before the movie began to let that Nashville sound take root in him.

Pixar does so many things so right so often it makes audiences take the studio for granted. The release of The Incredibles on Blu-ray should still shock us in all the right ways. It's a superhero film with a deliciously meta angle, an action caper with slam-bang entertainment and a comedy with some very big laughs.

Bob and Helen (voiced to perfection by Craig T. Nelson and Holly Hunter) give up the superhero life after a series of lawsuits and bad press badger them into submission. But middle class living doesn't suit Bob, nor do the couple's kids like having to hide their super powers. But when a strange figure reaches out to Bob for help, the clan is lured back into the family business.

The superhero genre may be close to exhaustion by now, but "The Incredibles" feels as fresh today as it did back in 2004. Watching Bob behind a desk in a soul-killing job is priceless, and smart supporting characters like Samuel L. Jackson's Frozone simply add to the fun.

The Blu-ray extras include "The Incredibles Revisited," a chance to hear writer/director Brad Bird explore the film and its impact. The movie comes with a separate Blu-ray disk filled with extras included deleted scenes shown in storyboard form, content from previous DVD incarnation and "Paths to Pixar: Story Artists" offers a brief but fascinating glimpse into the creative process and how three different visions for a scene in the film were coalesced .