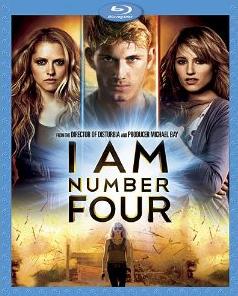 I Am Number Four is part Starman, part Superman and all throwaway teen angst.

Director D.J. Caruso (Disturbia) cribs from a number of superior sources in this tale based on a popular teen novel co-written by James Frey. Young and hunky "John" (model-turned-actor Alex Pettyfer) is an alien on the run from a race of creatures dubbed the Mogadorians.

John and his fellow alien protector (Timothy Olyphant) try to stay as anonymous as possible to keep safe, but John's budding super powers can't help but get attention. His hands light up like a flashlight, and when he pushes the air strange and wonderful things happen. Those powers can't prevent him from falling for a pretty high school student (Glee's Dianna Agron), a romance which puts the runaway aliens in jeopardy.

This sudsy sci-fi romp stumbles at nearly every turn, from its hackeneyed villains to the lack of escalating tension, but it's prettier than a picture thanks to the attractive leads and slick special effects. Teresa Palmer ramps up the aesthetic factor as Number 6, the mysterious alien who may hold John's fate in her hands.

We're given little back story in Number Four, so we‘re left with some ornate action sequences, a rare bland role for Olyphant and the hope that the story doesn't yield a new franchise.

The Blu-ray extras include six deleted scenes introduced by Caruso, bloopers and a segment dubbed "Becoming Number 6." The latter looks at rising star Palmer and why she got cast as the enigmatic alien.

"I never thought I could be a bad ass," confesses the Aussie beauty who evidently proved herself wrong during the audition process.

Steve McQueen may always be known as the King of Cool, but in the 1973 film Papillion he proved he could act with the best of his generation.

McQueen plays Papillion, a man cast into a French prison on Devil's Island for allegedly killing a pimp. There is no hope of escape, but that doesn't prevent him from teaming up with a mousy counterfeiter (Dustin Hoffman) to figure out some way to earn their freedom.

Papillon, lovingly restored for the high-def format, may be a beast to endure thanks to its extended running time and the punishing conditions visited upon the main characters. Our antiheroes endure solitiary confinement, horrid rations and the constant threat of death by a trigger-happy prison guard. But it's hypnotizing all the same, an impeccably crafted ode to the human spirit directed by the man who gave us Patton and Planet of the Apes, Franklin J. Schaffner.

The Shawshank Redemption may be the most popular prison picture in modern times, but the superior Papillion should earn some converts thanks to this sterling release.

The Blu-ray edition, with a hardcover binding including fun film trivia, features a "making of" segment shot during the movie's creation. The featurette details the bonds forged between the actors on set while letting the story's real-life inspiration, ex-convict Henry Charriere, marvel at how Hollywood recreated the horrors of his imprisonment.

Straight-to-DVD fare is rarely as packed with so many familiar faces—and bald ambition—as one sees in The Big Bang.

It's a film noir with lofty intentions, but it's ultimately a futile film experiment in pushing the genre envelope.

Antonio Banderas stars as Ned Cruz, a private detective on the hunt for a Russian thug's missing girlfriend. The search takes Ned from one unsavory haunt to the next, and before he knows it he's also on the prowl of a stash of diamonds. The story unfolds in flashback, as Ned is interrogated by a trio of cops in good cop, bad cop, worse cop format.

Snoop Dogg, James Van Der Beek and Autumn Reeser (Entourage) all drop by for a quick scene or two, but the fun doesn't really begin until Sam Elliott appears as a billionaire with astrophysics on the brain.

In The Big Bang, detectives can cut down on their legwork with Google, a nice wrinkle to the shopworn genre. Director Tony Krantz packs Bang with arresting visuals and killer compositions, but it quickly becomes clear that the muddle screenplay won't let the fun last too long.

The film's Blu-ray release includes commentary from the filmmakers, deleted scenes and a peek behind the making of the film. The minds behind the movie got their inspiration from some pretty far-flung sources, including Charlie Rose's PBS talk show, National Geographic and, of course, noir novelist Raymond Chandler.

Platoon did more than catapult Oliver Stone into the upper echelon of Hollywood directors. It put an exclamation point on the industry's resurrection of the Vietnam War as a relevant sub genre. The film's extras laden Blu-ray release enriches the Oscar-winning film while revealing a cast not easily forgotten. The film features a future megastar (Johnny Depp), Oscar winner (Forest Whitaker) and, of course, Tiger Blood devotee (Charlie Sheen).

The young Sheen stars as Chris Taylor, a new infantry soldier who volunteered to serve his country. But the inhumanity all around him, much of it from his own side, shows him the error of his decision. Tom Berenger is tougher than steel as the platoon commander without a moral compass, a walking symbol of everything that went wrong with the war.

Stone's bravura camera work never intrudes on the narrative, and Sheen lets audiences witness the war through the country's naïve point of view. The writer/director based the film on his own Vietnam War experiences, and that personal connection gives Platoon an immediacy few war films can match.

The copious Blu-ray extras include commentary tracks from Stone and military advisor Dale Dye and extended and deleted scenes with Stone's two cents added in. The best bonus feature, "Flashback to 'Platoon,'" provides a nuanced historical context. Platoon takes place from 1967-68, a time when the country lost both Martin Luther King, Jr., and Robert Kennedy and started to realize this was one war the U.S. may not be capable of winning.

Tags: I Am Number Four, Papillion, The Big Bang
Print