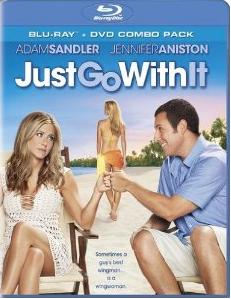 Adam Sandler may be the laziest superstar in Hollywood. His films almost always make a mint, but he plugs himself into the same slapdash formula over and again. Now with Just Go With It, Sandler manages to top even his worst outings.

Sandler plays Danny, a successful plastic surgeon who woos the ladies by pretending he's an unhappily married man. When he meets the freakishly beautiful Palmer (model Brooklyn Decker) he gets ensnarerd in his own web of lies. She finds his "wedding ring," forcing him to concoct a story that he's on the cusp of divorce. He asks his loyal assistant Katherine (Jennifer Aniston, way too classy for such tripe) to pretend to be his future ex, but she bungles the assignment and reveals they have two children.

If this all sounds like a hopelessly contrived spin on the 1969 film Cactus Flower, you're right. Add bracingly unfunny cameos by Nicole Kidman and Dave Matthews and you're left with a comic Hindenberg.

The opening sequence delivers a few easy laughs at the expense of Danny‘s surgically mangled patients. But nearly every subsequent gag is steeped in stupidity. The leads have zero chemistry and less than zero reason to be attracted to each other. But just guess where this is all headed.

The Blu-ray extras include commentary tracks featuring Sandler, director Dennis Dugan and co-star Nick Swarsdon, plus some blooper snippets that hardly enhance the humor quotient. One bright exception has Kevin Nealon, playing the same overly stretched patient from the film, punking strangers in character. It's a fine example of how Blu-ray extras can extend the film experience.

The Coen Brothers took us all by surprise with their remake of the western classic True Grit. They put aside their camera tricks and ironic humor for a conventional western, proving once more there isn‘t a film genre they cannot master.

Yes, the Oscar winning duo claims Grit isn't a remake of the beloved 1969 John Wayne film of the same name. The new Grit does stick more closely to Charles Portis' 1968 novel and wraps in a bittersweet fashion. Still, the tale of young Mattie Ross and the drunken marshal hired to find her father's killer hits most of the same story beats as the original.

Jeff Bridges doesn't dare recreate The Duke's take on Rooster Cogburn, the man said to possess "true grit." Bridges makes the ornery marshal his own creation, a flawed lawman with enough pride to get the job done. Newcomer Hailee Steinfeld is a minor revelation as Mattie, but the biggest upgrade over the original is casting Matt Damon to play the fiery LaBouef, the Texas Ranger also on the trail of the man who killed Mattie's pa.

The engaging Blu-ray extras include "Behind the Scenes with Mattie Ross," "The Cinematography of True Grit," "Re-creating Fort Smith" and a tribute to the writer whose work inspired both the Wayne film and the Coens' latest triumph.

In "Ross," young Steinfeld shares how her mother whipped up an Old West costume the night before her audition. "Charles Portis - The Greatest Writer You've Never Heard Of" is an exhausting look at the underrated mind behind Grit, with a gathering of fellow scribes marveling at his vibrant prose. Young Portis served in the Korean War and returned to start a career in journalism, but the desire to write novels interrupted his career trajectory.

The Man Who Would Be King reminds us of the peril of absolute power and the joy of watching two great actors tearing through a 19th century romp.

King casts Michael Caine and Sean Connery as a pair of lovable ex-soldiers out to find grand adventure in any shape or form. They end up in Kafiristan, where Connery's character is mistaken for a god. The accompanying spoils transform him into a power-hungry king, much to the consternation of his more sensible sidekick.

Director John Huston labored for years to bring Rudyard Kipling's farcical tale to the big screen. The results fall short of classic status, but the ribald humor and genial interplay between the stars should more than suffice. And watch for Caine's real life wife, Shakira Caine, as the beauty Connery's character covets.

King has plenty to say about western arrogance, but the story does so without interrupting the comical flow.

The film comes in a hardbound cover with photos and trivia about the production's history. The main Blu-ray extra is "Call it Magic: The Making of The Man Who Would Be King," a ‘70s era making of featurette.

Had Huston had his way, Clark Gable and Humphrey Bogart would have played these garrulous con men, but it took 20 years before the famed director could officially get the project in motion. The behind the scenes footage shows a grinning Huston overseeing the climactic battle sequence, the sight of a dream finally becoming reality.

The Company Men hit theaters at precisely the right time earlier this year, given the still sorry state of the national economy. Yet Men barely made a dent at the box office.

A vigorous round of downsizing sends three white-collar workers teetering toward the unemployment lines. Bobby (Ben Affleck) sees his termination as a temporary blip. The longer he stays out of work, the more he realizes being unemployed could wreck his family's financial status —and his ego. Chris Cooper and Tommy Lee Jones play men higher up the corporate ladder who find the economic squeeze can reach anyone at any time.

ER executive producer John Wells, making his feature film debut as a writer/director, nails the big picture but struggles with the more intimate details. Affleck's character is too arrogant to win our sympathy, and some of the plot devices which steer his character feel manufactured.

Supporting player Kevin Costner owns his section of the film. He plays a cobalt blue collar worker who thrives thanks to his own hustle and grit. It's satisfying to see Costner's transition from leading man to character actor of consequence.

The Blu-ray features an alternate ending, deleted scenes, a commentary track and a making of featurette. Wells, who researched the film in part by participating in online chats with downsized workers, says the movie reflects a modern truth about the country.

"People moved away from building things they could see and be proud of ... it's one reason why this has been such a dislocating recession," Wells says.

The only way Superman: The Motion Picture Anthology could better satisfy superhero fans is if it came with blue tights and a majestic red cape. The Blu-ray box set features all the Superman movies, from the 1978 classic starring the then-unknown Christopher Reeve to Superman Returns, the modestly received 2006 reboot featuring Reeve doppelganger Brandon Routh. The set even squeezes in Superman II: The Richard Donner Cut, the lost film reconstructed from footage Donner shot during the making of the original Superman.

Ponying up for this Anthology means enduring Superman IV: The Quest for Peace, the worst of the Super films and one where the budget got hit by Kryptonite. But even Superman III has its goose bump moments.

Reeve remains the quintessential Man of Steel, a hero whose decency and strength could power past even the forced comic stylings of Richard Pryor (Superman III) and Jon Cryer (Superman IV).

The package arrives with more extras than a comic book geek could ever want, including a look at how Donner's version of Superman II finally came to be and the science behind Superman. But the best feature recalls the creation of Superman, the film that made us believe a man could fly. The surviving members of the film's creative team share every last twist in the saga to make the saga, and you'll hang on every anecdote.

Who knew Marlon Brando originally compared his character, the white haired Super pappy, to a bagel? Donner shares that remarkable story as well as many more juicy memories film fans will lap up.

Hair's Blu-ray release lets the sun shine in glorious high definition. The 1979 triumph from director Milos Forman (Amadeus) follows an aw, shucks Midwestern lad named Claude (John Savage) in the days before he ships off to Vietnam. Claude bumps into a loosely knit band of hippies led by the shaggy Berger (Treat Williams), and his staid conceptions of life will never be the same. Forman integrates the music seamlessly into the story and draws sterling performances out of both Savage and Williams.

The film's final reel drops the fizzy caroling for a sober portrait of the cost of war. It's a rare example of perfect fillmmaking.

Let's hope Hair's Blu-ray debut leads to a richer release down the road. The film cries out for extras, but the film arrives without a single goodie.

Tags: Just Go With It, The Man Who Would Be King, Superman, The Company Men, Hair
Print