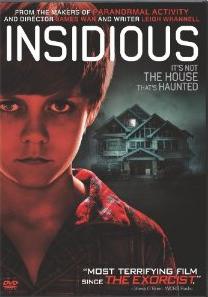 Who knew the minds behind the Saw franchise would bring horror back to its old-school roots?

Patrick Wilson and Rose Byrne star as the parents of a boy who slips into a coma that confounds the medical community. Strange sounds erupt through the family's home while the lad sleeps, convincing them to change addresses. Seems like a smart move, right? Guess again. The couple soon realizes those bumps in the night have followed them to their new mailing address.

Director James Wan knows a good scare fest needs the right blend of shocks and tension-relieving laughter. So, after shoving us to the edge of our seats for a good hour we get fine comic relief in the form of a bumbling paranormal investigative unit.

Insidious staggers in its final 20 minutes, as if the filmmakers didn't have the courage of their spooky convictions. But it remains a shockingly good time even for those not weaned on the old school horror films the movie honors.

The Blu-ray extras include "Insidious Entities" which details the pecking order of the ghosts lurking through the film and "Horror 101: The Exclusive Seminar."

"Take as much time casting the house as you would casting the actors in it," Wan advises. Leigh Wannell, the film's co-writer and co-star, says character development remains crucial to the genre.

"You've got to be able to relate to these people before the actual stuff happens," Wannell explains, adding he's had enough of those fake scares too many horror movies employ today.

The Insidious extras should be mandatory viewing for the next generation of horror auteurs.

Matthew McConaughey ditches rom-coms for a film which reminds us why we cared about him in the first place. In The Lincoln Lawyer, his first legal drama since his breakout hit, A Time to Kill, he plays an attorney who operates out of the back of his car.

His clients are shady to the core, but as long as their checks clear he's happy to do their bidding. But a new case involving a preppy (Ryan Phillippe) accused of murder threatens more than just his livelihood.

The film, based on the characters created by author Michael Connelly, isn't as tight as previous legal thrillers. But McConaughey is captivating as the smarmy lead, and the fine supporting cast (Marisa Tomei, William H. Macy and Josh Lucas) provides a touch of much needed class.

The Blu-ray extras include deleted scenes, a chat with McConaughey and Connelly, plus a feature on the author dubbed "At Home on the Road."

"Most of the readers have never been here, so you want to give them a distinct flavor of what LA is like, and nothing does that better than a car," Connelly says.

In "Making the Case: Creating The Lincoln Lawyer," Connelly reveals how he came up with the concept of a car-bound legal eagle. He met a lawyer at a Dodgers game who worked out of his car. The lawyer told him moving between courthouses takes up much of his day, which meant a mobile office made perfect sense.

"After the game was over I felt pretty strongly I had a whole book that could go the distance," the author says.

Miral, set amidst the roiling Israeli/Palestinian conflict, packs enough drama on the surface to fill a franchise. Yet this sprawling tale never captivates as it should.

The film tracks a dedicated teacher (Hiam Abbass) who spends decades instilling the ABCs in poor Palestinian children. Her tale collides with that of Miral, (played by Slumdog Millionaire's Freida Pinto as a young adult), a curious woman who gets involved in the conflict. Miral's moral awakening hits more than a few bumps. She runs afoul of the Israeli legal system and clashes with her concerned father. Pinto's stunning features can convey a crush of moods, but she's reduced to a cipher by a movie more interested in speeches than real dialogue.

Painter turned director Julian Schnabel (The Diving Bell and the Butterfly) ensures Miral is always beautifully composed. But Miral isn't sturdy enough to convey the depth and despair of the situation.

The Blu-ray extras include a studio tour by Schnabel, a grainy filmmaker Q&A, deleted scenes and a satisfying "Making of ‘Miral'" featurette.

Writer Rula Jebreal, who adapted her own book, used her personal connections to give Schnabel access to some of the fantastic backdrops which enliven the film.

[Rec] 2, the sequel to the surprise Spanish horror hit, proves the single cam genre is far from perfect.

The sequel begins only a few minutes after the action from the previous installment wrapped. A new group of people are prepping to enter the quarantined building, but this time they're armed to the teeth and ready for anything.

Well, not quite anything, apparently, as the film‘s body count gets an early boost once the zombie-fied creatures appear.

The first film kept the infection purposely vague, but for round two we learn the building is Ground Zero for a satanic outbreak. That supernatural context doesn't make sense even by the pliable rules of the horror genre, and it's one of many signs the film won't duplicate the original's chills.

The new characters are thinly realized, a fact made worse by the cam footage technique. The additional of several new camera angles, including picture in picture sequences, should have doubled the intensity. Instead, we're left visually detached from the horrors going down.

There are some scares, and the sight of those rabid, infected beings will always startle. but the entire movie is too frantically paced to matter.

Single-cam style horror movies have done a masterful job of wringing every last creative ounce out of the restrictive format. [Rec] 2 hints the format may be reaching its creative limits.

The DVD extras include deleted and extended scenes, a set walkthrough and three dry but informative behind the scenes featurettes. The latter shows the cast debating the tiniest details of a ceiling crashing down during a tense sequence and other minute details of what appears to be a highly complicated shoot.