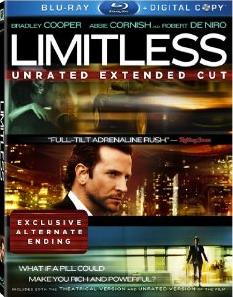 Limitless puts a fresh coat of paint on the science fiction genre while showing Bradley Cooper's career Hangover is only beginning.

Cooper plays Eddie, a struggling writer whose mind expands after taking a funny little pill given to him by his ex-brother in law. It's called NZT, and it allows the user to tap his or her entire brain, not just a fraction of it as most people do. Suddenly, Eddie is finishing his new novel in record time and juggling facts and figures faster than any computer. His heightened awareness attracts the attention of a powerful business man (Robert De Niro) but it also gives Eddie a second chance with his old frame (Abbie Cornish). But all drugs have some side effects, and taking too much NZT could be hazardous to Eddie's health.

Director Neil Burger uses too many visual tricks to illustrate the power of the pill. The only gimmick needed is Cooper, who segues from a lost soul to a man who suddenly has everything he ever wanted in convincing fashion. The A-Team reminded us Cooper has a handsome mug, but Limitless proves he's more than just a winner in the gene pool jackpot.

The Blu-ray package includes an extended version of the movie, a commentary track by Burger, a standard "Making Of" featurette and an alternate ending.

Take Me Home Tonight is like a 1980s comedy dug up from a time capsule. But strip away the shoulder pads and skinny ties and you're left with a VH1 nostalgia special gussied up as a feature film.

Topher Grace stars as Matt, a recent MIT grad stuck selling VHS tapes for a living. The girl of his high school dreams (Teresa Palmer) enters the store one fateful day and invites him to a high school reunion party. Before you can say "everybody Wang Chung tonight" Matt and his husky bud Barry (Dan Fogler) hit the party so Matt can get one last chance at romance.

"Tonight" luxuriates in everything ‘80s, but it can't recreate the simple pleasures of the decade's best comedies. Grace is unusually irritating as Matt, a young man who concocts a phony personality to woo Palmer's blank-slate beauty. The farcical situations rarely draw laughs, and Fogler's antics play out like a bad Jack Black imitation.

The Blu-ray extras include deleted scenes, a "music boom box" including such ‘80s staples as "Come on Eileen" and "Safety Dance" plus a "Cast Get Together" segment where the leads reveal their first impressions of each other. It's a chummy affair that doesn't shed much light on a production that never comes close to recreating that essential John Hughes magic that made the ‘80s so memorable.

Don't look now, but we're in a mini-golden age for thoughtful science fiction, the recent Skyline being an ugly exception.

Duncan Jones, the man behind the clever 2009 film Moon, is back to keep the resurgent genre kicking with Source Code, a neat twist on time traveling.

Jake Gyllenhaal stars as a helicopter pilot taking part in a radical new program which allows people to inhabit a stranger's body for a spell. Gyllenhaal's character is deposited into the body of a passenger on a train which earlier had been blown up by a terrorist's bomb. The pilot has roughly eight minutes to find information about the person behind the attack before the bomb explodes. If he fails, he can try again ... and again ... in a peculiar twist on the Groundhog's Day formula. U.S. officials suspect the fiend behind the train bombing is planning a bigger assault on a major city, so every clue the pilot gleans from his time traveling could be vital. But why is he being kept in the dark about the plan?

The Blu-ray extras include a commentary track with Jones, Gyllenhaal and screenwriter Ben Ripley plus "Access: Source Code," a comprehensive grab bag of cast interviews, commentary from scientists and trivia nuggets accessible during the movie.

The "Did You Know" trivia nuggets will test your eye sight even on a large television screen, but the droll information provided by Sergei Gukov, professor of theoretical physics and mathematics at CalTech, lends the material a patina of gravitas.

Viewers also get the standard comments from cast members about Jones and why he's so well suited to sci-fi fare.

"He brings a warmth to a genre that can be quite cold at times," co-star Vera Farmiga says of the hot young director

Enter Rango. And while Depp only provides the voice for this clever CGI tale's main character, the diverse thesp's presence makes it the best non-Pixar animated film in some time.

Rango, a skinny lizard sporting a Hawaiian shirt, stumbles into a town where all the water has dried up. A few tall tales later, Rango convinces the locals he's the right man to find out why the town went dry. Only Rango is nothing but a two-bit actor making up his heroism as he goes along.

The animation in Rango marks another landmark in CGI artistry, from Rango's scaly exterior to the mangy characters in the town known as Dirt. But it's the story's existential trappings that make Rango such a treat. Kids will chortle over Rango's slapstick, but their parents will appreciate the search for meaning that marks Rango's quest. A grand supporting cast led by Ned Beatty as the town's mayor gives Rango a richness many animated films lack.

The Blu-ray presentation includes deleted scenes, "The Real Creatures of Dirt" detailing the inspiration for the colorful characters in the film and a peek into the story's creation.

Director Gore Verbinski and co. used classic westerns as a visual palette to help anchor what they dubbed a "Don Knotts" story with a lizard standing in for the bug-eyed actor. That doesn't discount the film's meatier themes, something that attracted the core crew at the dawn of the project.

"There's something spiritual about the desert. I always felt that way," Verbinski says.