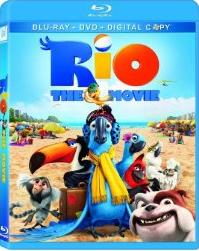 Rio is like a do-it-yourself Pixar movie kit. You've got your splashy animation, a few jaunty musical numbers and a vocal cast packed with hot young stars. It still can't measure up to your average Pixar production, but it's a candy-colored diversion with grand Brazilian flair.

Jesse Eisenberg voices a neurotic Macaw named Blu who got swiped from his native Rio as a lad. Years later, Blu has forgotten all about his roots and simply enjoys bonding with his American owner Linda (Leslie Mann). But when a nerdy ornithologist plans to mate Blu with a fellow macaw back home (Anne Hathaway) Blu's uncomplicated life unravels. And he's not too happy about it, although the new Macaw in his life could change his mind.

"Rio" finds a great supporting character in Tracy Morgan's slobbering bulldog, and Jemaine Clement adds menace as a villainous cockatoo. But the story lumbers along without much energy in the film's second half despite a number of individually humorous sequences.

"Rio's" Blu-ray extras include "Saving the Species One Voice at a Time," an expansive featurette breaking down the cast's approach to the project as well as the animation short cuts which brought Blu to Technicolor life.

Eisenberg marveled at how the director pushed him to ad lib some lines, all the while knowing each snippet of extra dialogue could spark weeks of extra work for the production crew.

"Explore the World of Rio," which should delight young viewers, lets you "visit" a Brazilian beach, city, jungle and stadium without punching up Kayak.com.

The image of John Cusack holding a boom box aloft in Say Anything... remains one of the eighties' defining movie moments. But his less heralded turn as the suicidal Lane Meyer in Better Off Dead gave us grand teen comedy gags.

Lane decides to end it all after his beloved Beth (Amanda Wyss) dumps him for a ski champion. But Lane's lame suicide attempts show he's just another fool for love. When he meets a beguiling foreign exchange student (Diane Franklin) he realizes there may be reason to keep on living after all. Besides, he has a score to settle with a certain ski jerk.

The Blu-ray release all but begs for some totally ‘80s extras, but all we get is the theatrical trailer. Dead might still vibrate with Reagan-era goodness, but the film doesn't look significantly sharper than the version you watched on your old cathode ray TV set.

Stake Land finds a new twist to the vampire genre by fusing it with the post-apocalyptic visions reserved for zombie movies.

A vampire epidemic brings the United States to its knees, leaving citizens defenseless against a wave of blood suckers. Enter Mister (Nick Damici), an undead slayer who takes on a young man (Connor Paolo of Gossip Girl fame) who just watched his family slaughtered by vampires. Together, they travel toward New Eden, a northern destination rumored to be free of the vampire menace. But can the pair keep their necks ouncture-free along the way?

Director Jim Mickle takes his time detailing his spare story, stopping occasionally to add a few novel components to what should be an exhausted genre. Damici makes his mysterious killing machine a different brand of hero, one impervious to sympathy or regret. But some of the apocalyptic touchstones used here feel stale, and Paolo can't make his wounded character come to life.

The Blu-ray extras include production video diaries, character prequels and "Going for the Throat: The Making of ‘Stake Land.'" The latter is an utterly raw look at the film's shoot, complete with shout outs to less heralded crew members like the Best Boy and the Gaffer. It's strictly for film school dropouts and anyone who ever thought they could pick up a camera and shoot a monster movie.