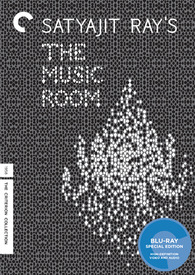 The second shot of Satyajit Ray’s The Music Room begins with curious, almost photographic stagnancy.  A noticeably forlorn man stares vacantly into fourth-wall oblivion; it isn’t until the frame draws back that the deliberate heaves of his chest indicate his present status as one of mortal perseverance.  A servant then enters the scene to provide the eccentric automaton with his customary hookah, and, before leaving, is asked, in an inquiry that perhaps even surpasses our current assessments of one man’s lethargic capacity, “What month is this?”

It’s not made initially clear why this man of apparently noble pedigree–Biswambhar Roy (Chhabi Biswas), a zamindar, or rather, a land-owning male who sits atop India’s feudally-stratified society–has surrendered to a life of such blurring quotidian monotony, but his current level of languor does seem to mask either an indifferent or damaged psyche.  What we see is essentially a shell of a man, one living in a palace that’s become corporeally decomposed to an almost skeletal essence; the excesses he once enjoyed have eroded with the caustic conflation of temporal elusiveness and alpha-male posturing.  Roy routinely flaunts his standing by way of nonchalant spending, positing his priorities as those relating more to public acceptance than realized comfort.

The narrative soon dissolves into a forty-minute flashback at which juncture we come to see just how adamantly the zamindar projects his pride, mortgaging his wife’s jewels–without needing her permission, mind you–in order to host an opulent soirée for his son’s initiation ceremony.  With this, Ray presents a tidily arranged hierarchy of both masculine and financial emphasis, exorcising the idea, at least in the mind of Roy, that economic fecundity and long-term stability are less dire ideals than temporarily persevering the status quo.  (He later, in the face of nouveau riche moneylender, Mahim Ganguly (Gangapada Basu), offers his remaining rupees to a female dancer as a gift of overcompensatory virile dominance.)  But the strokes with which Ray paints the straining nobleman aren’t unidimensional.  Too humanistic to read as a wholly actualized avatar for feudalism, and, by the same token, too defined by indulgent tendency to be subject of a character study, Roy is best seen as a parabolical creature of habit:  Throughout the film he merely consumes to whet his hedonistic appetite and masquerades as a man worthy of high prestige.  The two, of course, aren’t independent, much like the other examples of symbolic coupling in Ray’s film.  A certain cyclicality exists between these, among other, ascriptions, as it’s never divulged whether intemperance or egocentrism is the root of the zamindar’s waning wealth, or, for that matter, loss of identity and foresight.

And yet, it appears there exists a clear moral undercurrent that speaks to the pitfalls of vice and complacency, and the most pervasive aspect of this agenda deals with a need to recognize progress across realms of personal, technological, and cultural interest.  The Music Room is laced with omens that portend tragedy, to be sure, though to accept these signs as anything truly prophetic is to undercut the way Ray emphasizes his nobleman’s reactions to them:  It’s Roy’s interpretations of such foreboding beacons that propel the story’s dramatic arc, and not some fatalist notion that he’s a slave to destiny.  (The visual cues that hint to the calamity that occurs near the flashback’s end speak more to the director’s clever mise en scene than the film’s ideological punchiness.)  Of course, these warning signals do materialize in some rather obvious ways–Ray seems content with formalizing such harbingers of change by having the zamindar seeing it brew, quite literally, just over the horizon–but most of his allegorical folds demonstrate a congruent overlay of imagery and theme that not only adds dimension to the work’s moral potency but also a heightens the poeticism of Ray’s symbol-laden aesthetic.

The eponymous room is rife with emblematic flourish, so it’s only befitting that the film’s grandest formal gestures take place within its decadent walls.  A totem to indulgence, Roy’s music room is not only endowed with physical parallels to the man’s dissolving world–most notably the ornate but impractical, candlelit chandelier which represents a flickering existence of both a lifestyle and a lineage–but it also acts as Ray’s extension to comment on artistic expression.  Shot with a clear understanding of sensorial mapping, as the physical and aural cues of the performers are oft reflected upon the faces of their audience, these particular scenes come with a spatially sound understanding of the barriers between artist and observer: the editorial braiding of Ray’s frequent cutaways with shots of the august mirror hanging on the chamber’s wall illustrate the intimate give-and-take that’s inherent to art’s evocative nature.  And this motif not only extols the power of the classical Indian ragas that are housed within three extended performance sequences but it also imparts an observation on the place of art in our lives–its drug-like inducements, though spellbinding, only transiently remove us from our realities.

Like all great films, The Music Room contains timeless components that transcend the cultural or temporal context in which it was conceived.  Although Ray’s work is noted, and deservedly so, for the way it expounds on Indian feudalism while eschewing their cinema’s traditional incorporation of music, I find that its greatest riches lie hidden amidst those sociocultural undertones which are more telling of author than subject:  the way the surveying cinematography of Subrata Mitra visually contextualizes the viewers within Roy’s own confined cell of hedonism; the use of water, in all its rhetorical capacities, to evoke the unnoticeably erosive nature of time; the bristling result of intergenerational juxtaposition; and, perhaps its most universal offering, the premium placed on adapting and enduring when our life’s compass loses its bearings.  Unlike its overtly indulgent protagonist, The Music Room still exhibits strength throughout an ever-progressing cinematic landscape, as its empathetic take on tradition and austere grasp on eventualities point to a begrudging yet understood awareness for humanity’s frictional forward trek.

A definitive presentation if there ever was one, Satyajit Ray’s The Music Room demonstrates, with few, sub-surface scratches aside, an incredibly textured pictorial of an unraveling nostalgic entity in this Criterion release.  Kudos to the Academy Film Archive for their treatment of the prints–which were taken from a second-generation master positive–as their results showcase an otherwise implausible crystalline clarity throughout most of the film.  Contrast levels and color reproduction are especially immersive, as is the case when Roy sits before a wall of weather-worn brick, its monochromatic constitution feeling on par with the ever-feeling set pieces of the great Bela Tarr.  Other scenes, such as those in the music room itself, demonstrate an incredibly stable visual representation despite the dancerly crane work.  The audio track does well in differentiating the purposes of the diegetic and non-diegetic ragas, anointing the former as sensorially seductive action sequences and the latter as tonal conductors in what would otherwise be unfitting moments of silence.  The soundtrack comes across clear, and is free of any hisses or buzzes.

This is actually one of the more inclusive Criterion outputs in recent memory, and the work's bifurcated emphasis on cinema and music allow for a slew of supplements that inform on both subjects, though overlaps exists throughout the material.  I suppose this is my only complaint with releases such as this, as there's only a finite number of ways to analyze a work within the realms of scholarly acceptance–risk, in other words, is rarely rewarded in the academic arena.  The interview with Ray biographer Andrew Robinson, for example, duplicates much of what is written in the disc's accompanying booklet, particularly within the critical essay by Philip Kemp and the interview with Ray regarding the film's music.  Mira Nair puts the piece within the context of a cultural insider, though she too-often provides the same tired insights that we've read before.  The 1981 excerpt featuring French film critic Michel Ciment and director Claude Sautet offers up a somewhat insightful roundtable discussion with Ray, as their perspectives allot a more universal interpretations of the film's theme and presentation.  Finally, and most importantly, is the two-hour long documentary entitled, simply, Satyajit Ray, which chronicles the filmmaker's life and body of work.  Overall it's a bit dry, but the cooperativeness of Ray makes this composite of interviews more insightful than it is demystifying.