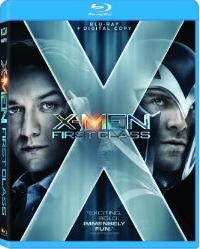 X-Men: First Class represents director Matthew Vaughn's belated attempt to helm an X-feature after flirting with the 2006 film X-Men: The Last Stand. For superhero fans it was worth the wait.

The story takes us to the dawn of the friendship between Erik (Michael Fassbender) and Charles (James McAvoy), two powerful mutants learning how their gifts can be integrated into society. Charles wants to find as many fellow mutants as he can to train them to best use their powers, while Erik is still processing a past that traces back to the Holocaust. But when a fellow mutant (Kevin Bacon) decides to use the Cold War as a way to stoke global calamity, Charles' young band of mutants must step forward to keep the peace.

Vaughn, who also co-wrote the film, proved he could deliver the "wow" with his last film, Kick-Ass. In First Class, he balances intricate character arcs, superhero trappings and even political science without losing any of the film's blockbuster luster.

Mutant standouts include Jennifer Lawrence as the blue-hued Mystique and former child star Nicholas Hoult as the Beast.

The best of the home video extras on First Class is a three-part "making of" feature that looks at the film from a sober, detailed vantage point. We learn about how the idea for the film first came about, why Vaughn decided to sign up for First Class after some bridge burning over The Last Stand and how crucial casting is to any X feature.

(note: X-Men: First Class hits Blu-ay and DVD Sept. 9, not Sept. 6 like the other titles here)

Wright's Hanna isn't based on a costumed crusader, but it pulses with the energy and excitement found in the best superhero films. And Hanna star Saoirse Ronan has a super-sense of precisely what any given scene demands.

Ronan is Hanna, a woman groomed from birth to be the ultimate fighting machine by her reclusive dad (Eric Bana). But Hanna's father knows she's getting too old to be hidden from society much longer. But when Hanna declares her freedom, government forces quickly swoop in to snatch her. The reasons behind the government's interest in Hanna are almost secondary to the brisk action sequences and powerful storytelling Wright brings to the film. It's an action thriller blazing with originality, a CIA yarn that doesn't feel like we've seen it a dozen times before.

Cate Blanchett is single-minded and ferocious as the head agent assigned to capture Hanna. And while the action scenes crackle Wright doesn't forget about the humanity behind the key players. Ronan remains a revelation, a teen incapable of hitting a false note.

The propulsive score by the Chemical Brothers sets Hanna even farther apart from its blockbuster peers.

The Blu-ray extras include an alternate ending which lacks sizzle, and a gathering of "Making Of" featurettes broken down into bite-sized morsels. The film's elements derive from core fairy tale principles. Bana describes the narrative as a parent's worst fears magnified - letting one's child alone in a very cruel world.

Critics had precious little good to say about the 1983 film Scarface. But popular culture had something else in mind.

Pacino plays Tony Montana, a Cuban refugee who works his way up the gang ladder to become a drug kingpin. Along the way he woos a stunning blonde (Michelle Pfeiffer), watches as a colleague meets the business end of a chainsaw and learns the hard way that a life of crime comes with an expiration date.

Seen today, Scarface defies traditional film criticism. It's overlong, overacted and ripe with orgiastic violence, the kind only the most apologetic sort would describe as social commentary. Yet all those flaws somehow make the film more of a visceral experience than many superior features.

The Blu-ray extras are an amalgam of new and previously capture footage, but taken together it‘s hard to imagine Scarface devotees not being satiated by the material.

Not only do you receive a DVD of the 1932 version of Scarface by director Howard Hawks, but a host of features include "The Scarface Phenomenon," 10 art cards featuring illustrations by Scarface devotees, deleted scenes, the TV version of Scarface and a look at the making of "Scarface: The Video Game."

Everyone from director Eli Roth to TV star Jillian Barberie-Reynolds chimes in on the film's cultural legacy, while the movie's main players share intimate details about the movie's creation.

"I wanted to establish a level of violence no one had seen before," de Palma says.

"I will not allow violence against this house," says Dustin Hoffman in the still-volatile film classic Straw Dogs.

The film's Blu-ray debut, timed to coincide with the release of director Rod Lurie's Sept. 16 remake, reminds us some button-pushing movies can age gracefully.

Hoffman stars as David, an American mathematician who moves into an English cabin with his wife Amy (Susan George). They quickly get to know a local group of handymen, one of whom briefly dated Amy.

The locals view David with suspicion and ogle Amy with impunity. David, in turn, appears emasculated by their presence and refuses to back Amy when she suspects the men are responsible for killing her cat.

Director Sam Peckinpah uses that set up to show how any man, even a geek like David, can summon something primal when pushed too far.

The film drew the ire of feminists for its complicated rape sequence, although it can be argued Amy's willingness to throw a mentally challenged man (David Warner) to the proverbial wolves is a far more damning indictment of her character.

Count Straw Dogs as the latest Blu-ray release begging for extras - but containing essentially none save some TV spots and the theatrical trailer.