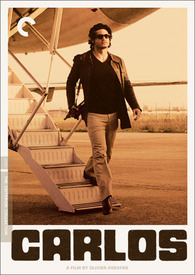 "Behind every bullet we fire, there will be an idea," pontificates Ilich Ramírez Sánchez (Édgar Ramírez) within a breath's reach of declaring, with a wholly undeserved sense of triumph, his eponymous nom de guerre, Carlos, for the first time.  This particularly self-aggrandizing utterance does more than act as an exercise in rhetoric—one that's as imperatively slanted as it is idealistically sophomoric—for it also functions as a neat encapsulation of the less-disingenuous-than-credulous filter through which the so-labeled "Peruvian playboy" views the Zionist and capitalist exorcisms he fights so verily for. You see, Carlos is a romantic revolutionist; he's ever-ready to act, yes, but he's a man more concerned with the modish sheen of activism than he is with understanding the causes and nuances of bureaucratically entrenched policies.

Unfortunately, the narrative makeup of Olivier Assayas's latest may be modeled a bit too closely to its subject's perfunctory take on politics.  Both the aforementioned character and the film as a whole seem accordantly defined by superficiality, with neither exacting enough exegetic force to disrupt the topic's implicative surface tension.  Instead, Carlos exists on a corneal plane, gallantly chronicling the terrorist's most famously fecund years without ever traversing potential sociocultural underpinnings.  Impressive is the way that Assayas rhymes his protagonist's fleeting conscience with a flippant emphasis on mortality, shuffling through scenes expediently in order to convey the fervor of fusillades, executions, and the like.  And yet, there's a hollowness to both the literal and metaphoric shells we see fired onscreen.  These disruptive discharges behave less in an ecologically Newtowian sense—that is, they don't exist within a cerebrally-felt environment, and leave naught that consequentially ramifies—than they do in an immediate, reflexive one.  In this, it's not ideas that propel the film's featured projectiles or its aesthetic flourishes; rather, it's a frantically organic need for improvisation that pushes the action, one that's apropos not only to criminal operations but also, as is the case here, rogue filmmaking.

For a work of such temporal and geological breadth, Carlos reads as surprisingly whole in way of cohesion, as it is able to earnestly catalogue volumes of one man's life whilst stripping it down to a quintessential, non-trivial framework.  The narrative itself mostly shadows its principal's actions, intruding not on moments of personal intimacy and reflection so much as those that further his involvement within international circles.  Naturally, moments of emotional encroachment do exist, but only in expository gestures.  And what we do see of this non-combatant Carlos reads as a pictorial of the unfettered, a man free not only of social etiquette but even a modicum of empathy.  He is a person of soldierly aggression, one willing to seduce and discard the women he encounters; one willing to poach prestige and credit from his friends, colleagues, and superiors; and even one willing to make decisions vested solely in the interest of his own self-preservation.  "Carlos scares me.  Life means nothing to him," quivers an accomplice in a profession of ostensible truth.  To be sure, mortal pertinence doesn't exactly align with this womanizer and his bacchanalian tendencies, but, to his credit, he does see his own life as more a cultural commodity than personal effect.  So there's that.

It's this out-for-number-one motif that helps explain, but does not totally excuse, Assayas's mostly unidimensional approach to characterizing his lead.  Ramírez's portrayal of the titular terrorist is one of bottled volatility, his Carlos a swaggering, cocksure entity who's too cantankerous for contrition and too physically emphatic to be taken seriously.  "Caricatural" could, I suppose, be an acceptable descriptor for the performance, though I find this to be a bit dismissive of the actor's efforts.  The most problematic symptom of the portrayal stems from how casually the director explicates Carlos's lust for the visceral by exchanging examples of sex and violence.  Too often are these carnal drives overlayed or interchanged, a device that dilutes both character and performance of substance and understanding; Carlos becomes a mere avatar for satiated virility, routinely unloading both his balls and ammo clips because that's what men apparently do.

In approaching an analysis of Carlos, it must be acknowledged that the film is presented as a work of fiction, that Assayas and company's research was met with informational chasms, and that fabrication was needed to flesh out the tonal and interactive minutia seen onscreen.  Such conceits come with the territory of crafting historically grounded cinema, but here the ambitious scope of the project allots but a cursory glance at Carlos, its living impetus.  Assayas noticeably eschews any attempt to "psychologize" the character, which is fine, but he curiously presents his portrait as one painted with critical strokes—the dynamic feels unjust, as if the filmmaker is vilifying the shallowness of his own creation.  Of course, I say this not to defend a murderer, but to suggest that the work simply cannot be interpreted as a character study, as such a transcription would reduce the idea of motive merely to image and repute.  Here, Carlos is more veneer than man, his image a conglomerated totem to the self.  Omnipresent in the back of frames is the image of Che Guevara , which unmistakably hovers over his shoulders like an advisory apparition, guiding his hand less in the name of conviction than accolade.  (That similar posters have become a staple of collegiate décor adds a sardonic quality to Carlos's own sense of self-design.)  Carlos patterns himself as more of a celebrity, a brand even, than someone/thing elemental to a larger cause, and he accordingly foists his importance upon everyone within an even-media-extended ear shot.

And yet, the guerilla's treatment of women—and moreover, Assayas's depiction of this dynamic—comes across as even more offensive than his barbarically entitled tenor would suggest:  Females gravitate to the lecher's lap as if by quantum law, and nary is this allure depicted as anything more than foolish, schoolgirl fawning.  The women of Carlos amount to nothing more than ciphers, and bouts of dialogue even underscore this coursing sense of sexism.  (This all seems increasingly odd when considering Assayas's previous film, Summer Hours, flaunted its examples of matriarchy and feminine strength as key thematic constituents.)  "When we all slept together she felt liberated," scoffs our lead, alluding to a ménage a trois participant who later became embittered when she was excluded from a subsequent bedding.  Through this statement, the film suggests that there's both hypocrisy inherent to feminine empowerment and that a fundamental gap exists between ideologies and their applications.  Yes, the latter point may prove true, but it too is weakly paralleled with Carlos's own ineptness with putting words into practice; Assayas refuses to compartmentalize notions of philosophy and function within specific arenas, and in doing so casts an opaque blanket over the picture's developmental creed.

Still, there is good to be found in Carlos.  A humorous contrast materializes between the character's egocentric posturing and his bumbling inefficiency, and this provides us with a quietly acerbic slight of not only the terrorist but also of contemporary politicians—that is, those who, like Carlos, move up the ranks due more to vocal adamancy than professional adeptness.  Moreover, because the film so ambitiously spans two foregone decades, a built-in temporal contextualization exists for modern audiences, elucidating the reactionary theme of how to adapt to an undulating global environment.  The most rewarding aspects of Carlos are those that deal with this idea of a mutative cultural climate—which, as mentioned above, reflects the unrehearsed conditions the filmmakers fought on set—and how these changes correlate to operational, perceptional, and positional evolutions.  Being a gun for hire requires a definite degree of elasticity in relation to one's obedience and affiliation; Assayas's greatest feats, aside from the sheer scope of this project, come from how subtlety he evinces this flexible brand of loyalty in the face of seismic landscapes and how the ideologically inert end up severed from worldly relevance.  By featuring and exploring the obstacles that are implicit to progression, the director is able to present a work that transcends its rather blasé context as a biopic, allowing it to mature into something far more cerebral than what its human subject offers—if only more could be said for that.

The most obvious advantage of releasing a historically-based picture is that the potential for DVD extras is elephantine.  Criterion takes full advantage of this fact, as their supplement package runs the gamut from historic interviews to journalistic perspectives to commentary from those involved in production.  Spread over four discs, these featurettes pepper the sprawling narrative with cold, factual insights, confirming the fastidious lengths the crew went to in putting out an accurate representation of the rebel's exploits.  The commentary tracks point out the amebic evolvement of the picture over time as well as the challenges faced in instilling the work with a discernable sense of identity.  Carlos: Terrorist Without Borders is a worthwhile, hour-long docu that was originally aired on French television.  Moments of redundancy exist between this feature and the film itself, though it makes for an edifying experience nonetheless.  An archival interview with one of Carlos's consorts, codenamed Angie, interjects some much needed humanism into the proceedings, as his recollections gradually hone in on the notion that his fractured youth caused a tangential shift in his life path.  Another documentary feature, Maison de France, details an attack not found in the film, including accounts by those involved on both operational and observational levels.  The forty-page booklet boasts two essays, one a hyperbolic appraisal by Colin MacCabe, the other a more earnest behind-the-scenes look by Greil Marcus.  A timeline of Carlos's career as well as some selected profiles of his associates round out the booklet, further communicating how diligently filmmakers' kept abreast with their historic inspirations.