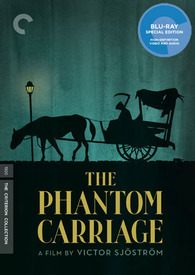 Victor Sjöström is a filmmaker with a penchant for delving into his characters' emotional apogees—the moments in their lives in which they've drifted so distantly from their normative bearings that they come to question the value of human life.  In exploring such extremes, Sjöström often leans on exploiting the vulnerabilities inherent to familial agency, positing unprecedented loss and unmet expectation as incitations to abandon one's mental and moral faculties.  Such events are rarely immediate; rather, misfortune comes to be manifested through social and circumstantial amassment, as the Swedish pioneer demonstrates a grasp on the delicate, overlaying folds of our changing ecological fabrics.  It's in these films—such as 1917's A Man There Was or 1924's He Who Gets Slapped—that he crafts elegies for what could have been, juxtaposing the romantic transience of dreams against the harsh gravities of reality.

The Phantom Carriage is a work defined by this there-but-for-fortune tenor, as Sjöström employs alcoholism, and one's proximity to it, as a way to explicate both the contagious nature of behavior and the pungent remains of dreams left to rot.  At the heart of the film is David Holm (Sjöström himself), an addict who perpetually turns to the bottle as a way to alleviate his hydra-headed social hang-ups.  A vertiginous relationship exists between Holm and the drink, as he relies on its effects as not only a social agent—which gives way to home-life woes, naturally—but also as his primary but delusive modality for emotional catharsis.  In this, Holm's path explores the ambit of one man's torturous existence, allowing him to glimpse the hellish effects of his actions in a manner that speaks to the connectedness of the human condition—how the consequences of others' actions shaped him, and how his current state shapes that of others.  And by using this sot as a narrative hub, Sjöström is able to meld his universe through the perspective-specific recollections of a handful of players, evincing an adroit understanding for the synergistic intricacies of the individual persona.

But because The Phantom Carriage is a film with parabolically monolithic roots, its emotional potency seems to flirt a bit with contemporary obsolescence.  (That the work's source material is a veritable how-to guide on preventing the spread of consumption also fastens a somewhat antiquated undercurrent to the picture's expositional chassis, even if such an inclusion can be seen as a desultory nexus for physical and emotional illnesses.)  It can be said for his translation, however, that Sjöström wisely, though perhaps unknowingly, extends an effort toward universal relevance by spinning this Dickensian yarn as more a tale of the destructive nature of cultural contagions than one of bodily affliction.  Of course, examples of the latter still crop up, as when an inebriated Holm nonchalantly coughs upon his sleeping children, only to laugh off his wife's pleas that he stop.  And in another scene he even scolds a fellow consumptive for not hacking away openly into, quite literally, the public face.  Still, the picture's most stirring examples of inhumanity belong to the bottle, and it's in these sequences that the director juxtaposes puerile innocence and bewilderment with the casual apathy and misanthropy of a drunkard; Holm's projected indifference, especially in view of his offspring, comes to read as but a reverberation of his own self-loathing.

For a narrative rife with flashbacks and perforated timelines, The Phantom Carriage fittingly introduces us to its titular legend the very first time it peers into the past.  Holm, drunk on New Year's Eve, warns two soused consorts that the last person to die that night is doomed to drive death's carriage for one year, spending their days wading through various dioramas of the macabre.  Although an arbitrary reason for inflicting someone with long-suffering strife—it's said that one day living in that existential limbo feels like a hundred years on earth—Sjöström is able to use this ticking-clock conceit as a means to conjure emotional urgency, for he shows a young nun (Astrid Holm) mortally straining as the aforementioned anniversary draws nigh; but rather, it's the dipsomaniac, Holm, who's struck down first, and by a near-dead soldier, no less.  It can be read that such a sudden death essentially lends itself to notions of fate, but, really, this affair is more indicative of justice and its elastic applications—the scope of this concept is explored with aplomb throughout the remainder of the work.  Many of the more moving elicitations that follow result from plays and interpretations of moral deservedness, as we're presented with the hypothesis that even Holm, for all his troubles, may be merely a victim of circumstance.  Through this, the film all but begs its audience to piece together the principal's social fabric in to order empathize with his plight rather than condemn his lost-soul estate.

The tonal culmination of the Phantom Carriage, while offering a crescendo of ominousness typical of Sjöström's oeuvre, exudes something elementally odd:  An understood sense for the certain uncertainty surrounding recovery, forgiveness, and reform.  Though the hallucinatory out-of-body aspects of Holm's spiritual trek ostensibly evoke a soul literally observing the physical world—thanks to some masterfully layered multiple-exposure shots—the film never presents a direct link between reality and the phantasmal.  Sure, the picture certainly exhibits a Judeo-Christian moral alignment, but it also posits that radical impetuses, such as divine enlightenment, may not beget radical change—sometimes only temporary emotional sustenance gurgles to the surface.  These ghosts of addiction are, to me, the most analogously apropos facet of The Phantom Carriage, as these illusory presences are ones that cannot be reaped, cannot be drowned, and cannot ever truly dissipate.

Predictable are the sub-surface scratches that litter the film's frames, though the presence of such imperfections does little to detract from the viewing experience.  The preternatural layering of Sjöström's imagery—thanks largely to DP Julius Jaenzon—establishes an eerily uniform level focus that's permissive of object textures regardless of their spatial allocation.  Detail is impressively homogenous across a multitude of interior and exterior shots, though the latter, I feel, exhibits a piercingly serene sense of contrast—the aphotic depths of the small-hours' shadows are as stunningly empty as an intoxicant's promises.  For my mind, the blue-tinted sequences fare best in this regard, as the cerulean hue seems to best conceal print damage while bolstering differences in visual minutia.  Lastly, the director's emphases of expression and gesture are suitably communicated through the relative clarity and stability of the overall picture, even if the sepia scenes read as less viscerally enriching.

The evocative contrast of the two soundtracks—one a literalist score by Swedish composer Matti Bye and the other an output from the "experimental group" KTL—offers a tonally combative look into the capacity of aural enhancement in film.  The prior offering feels like a more traditionally intonational interpretation, with the expected audial spikes during fits of more traumatic imagery, such as when the eponymous carriage is first seen.  The latter is a bit more environmental in its economy, relying more on a progression of moods than on visual cues.  Both are strongly presented, and curiously permutate the overarching mood and the amount of optimism portended in the closing frames.

This is probably a middle-of-the-road release for Criterion as far as supplements are concerned.  Casper Tybjerg's commentary track is informative, fine, but it lacks the coursing humanistic tendency that makes The Phantom Carriage so affecting.  The interview with Ingmar Bergman probably proves to be the most enriching extra, while Peter Cowie's visual essay, "The Bergman Connection," offers an inoffensive if superficial glance into parallels between the two's works.  The construction footage of Räsunda studio is a nice enough touch, though only in the vein of a time capsule piece; it lacks any semblance of edification.  As per Criterion's usual, the booklet featuring an essay by Paul Mayersberg is a worthy inclusion to the supplemental package, though I am, of course, partial to the written word.