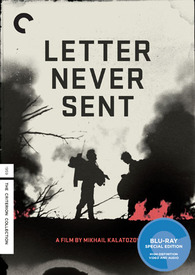 Mikhail Kalatozov is something of a manic filmmaker, not in the sense that he employs expeditious narrative device in his movies but rather in his pyretic, even paranoid, compositional emphasis.  Formally polyglot, Kalatozov’s films, as expressed in the astir perspectives of The Cranes are Flying or the apparitional surveying seen in I Am Cuba, often read as photographic treatises, works that plumb the depths of the cinema's aesthetic potential.  On this level alone, they sate artistic appetites.  Good thing, too, for these pictures can also come across as somewhat trivial on the human front, as the director’s—in alignment with the Soviet sociopolitical climate—spirited sense of national utility often elicits tinges of apathy on the individual level.  The Cranes are Flying, in particular, is a masterwork of lighting, mood, and cadence that, despite focusing on a star-crossed young couple, relegates the weight of personal loss to something of necessity; mortal failing is presented as kindling to lighting social fires.  This portrayal does, however, do well in projecting one against the backdrop of the bigger picture, evoking how personal tragedy is a ubiquitous aspect of life in the civilized world.

Similarly, Letter Never Sent extols the nobility of human progress, even in the face of individual demise.  Just as our contemporary luxuries are byproducts of ancestral tribulation, the four principles of its story embody the cost inherent to societal betterment.  The film opens on a geological quintet being left to explore the terrain of Siberia, a harsh, industrially uncultivated land representative of, simply, the unknown.  Early shots establish environmental agency, as the team slogs through natural impediments of marsh and flora on their mission to mine diamonds from their cold yet seemingly sentient surroundings.  Though each character is treated with token expositional flourish, their struggle against the land is of more symbolic rendering.  Kalatozov espouses his film to this ideology by constantly reducing his subjects to silhouette, indistinct entities moving over equally nebulous landscapes.  The entire thing is analogous, and broadly so, but not to the point of genericism.  Touches like the titular communiqué, a continuously building entity that augments feelings of personal severance with each pitiable update, aid in relaying how identity dissolves in the pursuit of national interest; overlays of flames both portend the crew’s fate and provide a visual sense of agency to their early, uneventful proceedings.

From the standpoint of craft, Letter Never Sent is mesmeric cinema.  Not only does Kalatozov construct the film in a disorienting, angular fashion—though with less calculation and exactitude than the frames of The Cranes are Flying—he constantly pushes the limits of visual space and depth, often beginning with a close-up but expanding this focus to relate individual to environment.  Some of the more drastic examples of spatial dynamicism recall antecedents, such as silent-era Dreyer, while more austere, wind-whipped shots evoke the contemporary schemes of Béla Tarr.  The result, at least from the standpoint of filmic language, demonstrates an adroit sensitivity to the power of the image.

None of these visual reflections are particularly challenging, mind you, but they do carry with them a profound sense of urgency.  Mirroring the picture’s concerns with manifest destiny—refreshingly from a human, not political, perspective—Kalatozov contrasts the explorers’ mite against the humbling power of nature.  As the four disconnect further from society, the director plays upon their innate carnality by having the characters verbalize comparisons between themselves and ill-flattering animal concestors.  The narrative’s hazy depiction of temporality, via seamless seasonal transitions, also underscores the infinitesimal scale of their human intervention against the grandeur of Earth—lives seem doomed to flux with the indifference of natural rhythms.

In the midst of actualizing their mortality, the players simultaneously, in a manner befitting Soviet ideals, realize their purpose as one of service.  A gloriously industrial fata morgana proves the most obtrusive onscreen testament to this, but at least it delineates how legacy outlasts a felt sense of esteem.  “My life isn’t my own,” opines one of the souls after apprehending the scope of his mission.  That life is wrought with pain is secondary to Kalatozov in this, a vis-à-vis study of personal survival vs. societal gain.  But the sacrifices linked to this stalwart progressive focus are what further the comforts of the masses.  Be it any field—artistic, scientific, or other—a certain disregard for the person, at times, can bequeath great treasures to the collective whole.  The cinema of Kalatozov may not be the most empathetically inclined, but at least he acknowledges this concession by braiding these notions with his knack for chiffon storytelling and strong aesthetics.

Though the source of the image is of somewhat inconsistent constitution, Letter Never Sent nonetheless looks remarkable on Criterion Blu-ray.  The picture’s more immersive qualities, most notably the dexterous camera work and creative shadow play, come depicted in an appropriately stable context, where detail is not sacrificed for the sake of the frames’ often balletic fluidity.  At times the visuals are softer than I’d like, though this is far from a commonplace fault; it’s hard to find error in a restoration of less than immaculate source prints.  Sound design is on the flatter end of the spectrum, but crystalline nonetheless.  The movie’s overarching emphasis on craft makes this a worthy edition to any cinematic anthology, and Criterion’s demonstrative efforts toward refurbishment only amplify its value.

More attention, however, would have been appreciated on this front.  As Kalatozov has myriad modern apostles, surely more material could have been produced that further examine his technical intricacy.  Alas, only an essay—which, to be fair, are usually the supplemental gems of their releases anyway—by Dina Iordanova accompanies the work and its visual majesty.