The first weekend of December is shaping up to be very slow as far as new releases are concerned. Holdovers will dominate.

After a very successful month of November, the first weekend of December is shaping up to be much more subdued.

Last weekend's champ, Four Christmases, has a very strong shot at staying in first place this coming weekend judging by the new competition that it will face.

Lionsgate's Punisher: War Zone is opening at 2,508 locations, the most of any new release. Still, its prospects are limited considering that 2005's The Punisher grossed only $33.7 million during its entire domestic theatrical run and neither of that film's two major stars, Thomas Jane and John Travolta, have returned for War Zone. With that in mind, War Zone should be able to muster $7 million during its opening frame. 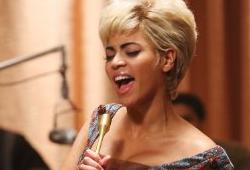 Sony is not putting much support behind Cadillac Records considering that advertising has been weak and the film is opening at only 686 locations. The drawing power of star Beyoncé Knowles may be enough to help the film post a mediocre haul of around $1.5 million during its debut.

Even though it's only opening at three locations, expect Frost/Nixon to post very solid numbers thanks to the Oscar buzz surrounding it. The political drama could average $50,000 or more per location this weekend on its way to a much wider release.