UPDATED: Weekend Predictions: 'Friday the 13th,' 'Confessions of a Shopaholic' and 'The International'

A horror remake, a film about a compulsive shopper and an economic thriller will try to win the #1 spot.

Audiences across the country will certainly have a diverse set of options at their local movie theatres this weekend. Three totally different new wide releases will be vying for the #1 box office spot that is currently held by He's Just Not That Into You. Thanks to the Presidents' Day holiday on Monday, all of the major wide releases will be able to add a little bit more to their hauls than they would on a regular Monday. 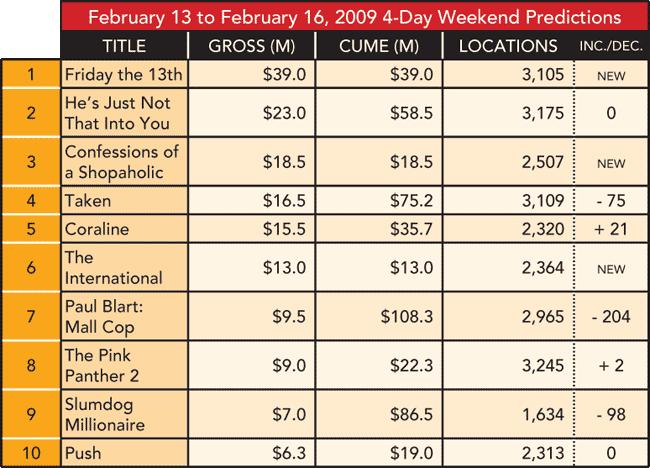 Friday the 13th will easily topple Into You thanks to brand recognition. After all, in 2007 MGM successful rebooted the Halloween franchise with the help of director Rob Zombie. That film opened in August, and it was able to bring in $26.4 million dollars during its debut frame. A second Halloween 2 is now set to hit theatres this August. Now, Jason is ready to receive the "reimagining" treatment.

Thanks to the loyality that the Jason character inspires, as well as the trust that producer Michael Bay has earned among mainstream audiences, Friday the 13th has the potential to open as strong as the films in the Saw series have. Saw V posted an opening weekend tally of $30.053 million this past October, and the highest opening weekend in the series belongs to 2006's Saw III with $33.6 million ($36.8 million when adjusted for inflation).

Online ticket sales for the film have also been strong. Friday the 13th represented 46% of Thursday's ticket sales on Fandango.com as of 4 p.m. PT.

Confessions of a Shopaholic is going to be overshadowed by He's Just Not That Into You for the coveted Valentine's Day crowds. Shopaholic appeals mainly to females audiences, where as Into You 's strong male ensemble makes it more enticing to guys who are taking their significant others to the movies.

Shopaholic 's star Isla Fischer is certainly untested as a box office draw considering that her claim to fame has been scene-stealing supporting turns in films such as Wedding Crashers. As of 4 p.m. PT, Shopaholic was responsible for only 7% of Thursday's ticket sales on Fandango.

Not to be forgotten is The International, an economic thriller which stars Clive Owen and Naomi Watts. Both Owen and Watts are only modest box office draws, and their best openings have always come thanks to the support of either more established box office successes or popular tentpoles. For instance, Owen starred opposite Denzel Washington in Inside Man which opened with $29 million in 2006 ($32 million when adjusted for inflation) and Naomi Watts had a supporting role in Peter Jackson's King Kong which opened to $50.1 million in 2005 ($56 million when adjusted for inflation).

Sony's marketing blitz for The International has been pretty strong, and the film's trailers promise some solid action thrills. Still, Taken has been holding its audience very well and even though it's in its third weekend of release it will grab the lion's share of action enthusiasts.