A group of monsters and aliens will take on a mysterious haunting and a WWE superstar this weekend. 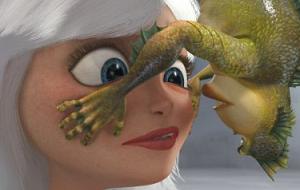 The presence of DreamWorks Animation will be felt once again this weekend thanks to Monsters vs. Aliens, a highly anticipated 3D flick that will easily grab the top spot at the box office.

While M vs. A won't be receiving the kind of release that DreamWorks executive Jeffrey Katzenberg had hoped for, it will still be playing on more than 2,000 3D screens across the country this weekend. Considering that 3D movie tickets carry a heftier price tag than their 2D counterparts, those 3D showings will help boost M vs. A 's haul considerably. In addition to being a big film for the 3D platform, M vs. A is also going to be the widest release for IMAX since it will be playing on 143 screens across the country and 56 internationally.

While the PG-rated M vs. A is a no-brainer for family audiences, it also has the potential to skew older due to its cast. The presence of Stephen Colbert, Seth Rogen, Paul Rudd and Reese Witherspoon may entice adults without children to go see the film.

As of Thursday at 4 p.m. PT, M vs. A accounted for 54% of overall sales on Fandango. The film is currently on par with Disney's Bolt at the same point in the sales cycle on the online ticketing site. Bolt opened with a modest $26.2 million last November, but it faced direct competition from Madagascar 2: Escape to Africa and Twilight opened the same weekend.

The Haunting in Connecticut comes on the heels of several recent horror releases including Friday the 13th, The Uninvited, The Unborn and Lionsgate's own My Bloody Valentine 3D, so if audiences are beginning to feel the saturation then Connecticut could suffer. Horror films that aren't part of an established franchise tend to land in the range of $11-$18 million, so expect Connecticut to finish on the lower end of that spectrum. As is the case with most horror films, Connecticut will suffer a steep decline after its first weekend.

WWE superstar John Cena will make his latest attempt at building a following in movie theatres with 12 Rounds this weekend. Cena broke onto the film scene with 2006's The Marine, which opened to $7.1 million (nearly $8 million after inflation) before bringing in $18 million ($19.7 million adjusted) by the end of its domestic theatrical run. The trailers for 12 Rounds promise fans of The Marine a similar experience, which means that Cena's audience will remain consistent, but it probably won't grow much especially since Connecticut and last weekend's champ Knowing will be gunning for similar audiences.