Weekly Anticipation Index: 'Terminator Salvation' and 'Night at the Museum: Battle of the Smithsonian'

Christian Bale and Ben Stiller will both enter the fray this summer with two highly anticipated new films. 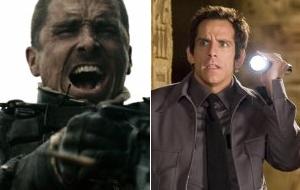 The first real showdown of the summer will come during the weekend of May 22 to May 24, when the continuation of one of the biggest sci-fi franchises of all time will go against the sequel to a surprise hit about a museum that comes alive.

With that in mind, B OXOFFICE has added Terminator Salvation and Night at the Museum: Battle of the Smithsonian to our Weekly Anticipation Index.

Considering that the two films will be aiming for different audiences, there will be plenty of room in multiplexes across the country for both. Salvation comes with a bigger built-in audience, which means that it has a slight edge. Although, it will face direct competition from other summer blockbusters such as X-Men Origins: Wolverine and Star Trek, which will both still be raking in solid amounts of cash by the time that Salvation opens.

2003's Terminator: Rise of the Machines grossed $44 million domestically ($52 million when adjusted for inflation) on its way to a cume of $150 million ($179 million adjusted), so it's a safe bet that Salvation will at least improve upon that slightly.

As for Smithsonian, it will represent the first major film of the summer for family audiences. The original Night at the Museum opened with $30.4 million domestically ($33.3 million adjusted) in 2006 on its way to a $250.8 million haul ($275 million adjusted). Smithsonian will have trouble maintaining its audience as long as its predecessor did considering that Disney/Pixar's UP will open the following weekend and inevitably scoop up the coveted family crowds.

We've also added Dance Flick to the Anticipation Index. As long as audiences aren't tired of spoof films in general, the comedy should be able post respectable numbers.