Miley Cyrus and Seth Rogen will both try to topple Fast & Furious at movie theatres this weekend. 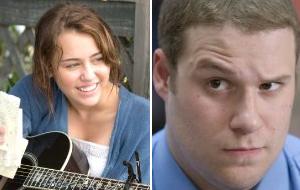 A teen sensation and a new mall cop will be invading the box office this Easter weekend.

“This weekend will be another good weekend for moviegoers,” says Joel Cohen, MovieTickets.com executive vice president and general manager. “There’s something for everyone with Hannah Montana: The Movie and Observe and Report opening Friday, plus the strength of the holdovers that should have legs like Fast & Furious and Monsters vs. Aliens. It should be interesting to see how all of this quality product stacks up."

The most successful Easter weekend of the last 20 years came in 2002, when David Fincher's Panic Room opened to $30 million and helped push overall receipts to a total of $132 million ($163.5 million when adjusted for inflation).

Miley Cyrus will try to strike gold once again with her Hannah Montana franchise in Hannah Montana: The Movie. The young actress was able to post solid numbers last February with Hannah Montana/Miley Cyrus: The Best of Both Worlds Concert Tour, which opened to $31 million from only 683 locations. Even though Disney billed it as being a one-week engagement it ended up hanging around in theatres for 15 weeks before ending its domestic theatrical run with $65.3 million.

Since teen stardom is so fickle, it's hard to say whether or not Cyrus is on her way up or on her way down. While her recent string of publicity mistakes as well as her controversial Vanity Fair spread may have alienated part of her more conservative fan base, that probably will have little or no effect on the performance of her latest film. Even though basing all of your financial prospects on an audience that will inevitably leave your side is a tricky endeavor, Cyrus can probably bank on being able to squeeze out a couple more successful creative ventures before her fame runs its course.

Early ticket sales for Montana are solid. As of 3 p.m. PT on Thursday, Fandango is reporting that the film represents 76% of its total sales. Meanwhile, MovieTickets.com watched sales nearly double from Tuesday to Wednesday.

Even though the reviews have confirmed that O&R is tonally different than Paul Blart: Mall Cop, audiences will likely feel a very strong sense of déjà Vu when weighing whether or not to see O&R this weekend. The fact that Blart has grossed $143 million domestically so far means that O&R will have to settle for being the second most successful mall cop comedy of the year.

Also new this weekend is Fox's Dragonball Evolution, which has been given a mediocre marketing blitz. The adaptation of the popular animated series will have trouble grabbing audiences outside of its devoted fan base, especially considering that Fast & Furious will be gunning for the same demographics.

Fast & Furious could lose as much as 55% of its audience this weekend, but it will represent a very viable choice for teenage audiences that are too old for Montana and too young to get into O&R.