Weekly Anticipation Index: 'UP' and 'Drag Me to Hell'

After the success of WALL-E last summer, Disney/Pixar are back once again with UP. 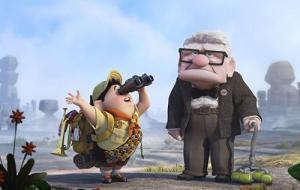 Two radically different movies will open on May 29. One is an animated film from Disney/Pixar and the other is a horror flick from the director of Spider-Man and Evil Dead.

Without question, Disney/Pixar's UP will win the weekend even though it will have to compete with Night at the Museum: Battle of the Smithsonian, which opens the previous weekend, for control of family audiences.

UP represents something of a change as far as Disney/Pixar collaborations are concerned, since it will be the first time that average human beings are the main focus of the story. Using everything from cars to fish to superheroes as protagonists has resulted in huge financial success at the box office. The marketing team behind UP seems to have recognized that this film exists slightly outside of the Disney/Pixar comfort zone because the names of past titles have been emphasized heavily in the film's trailers.

The fact that UP is something different is a minor concern for a creative pairing that has more than earned its strong reputation. If anything, it simply means that the film will be successful, but not the duo's greatest box office success. Due to its unconventional opening and a bleak social commentary, WALL-E was also considered something different and it still grossed $63 million domestically during its opening weekend before ending its run with $233.8 million. Audiences have come to trust Disney/Pixar unconditionally.

With Drag Me to Hell, director Sam Raimi will return to his horror roots after finding mainstream success with the Spider-Man films. The tagline "from the director of Spider-Man " will certainly convince more than a few moviegoers to check out Hell and Universal is wisely using that asset since the film boasts no major stars.

The first trailer for Hell is effectively creepy, and it also shows a little of the camp factor that horror buffs go crazy for. Hell will represent a solid option for moviegoers who like their films to have a little more grit to them and the fact that it has been given a PG-13 rating will also help boost its numbers.