Weekly Anticipation Index: 'Land of the Lost' and 'The Hangover'

An adventurer and some hungover friends will take hold of the summer box office during the first weekend of June. 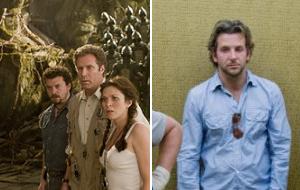 During the weekend of June 5 to June 7, Land of the Lost and The Hangover will enter theatres to try and grab as much cash as they can during the heart of the summer movie season.

Lost will represent a new direction for Will Ferrell considering that he's never really tried the sci-fi/fantasy genre before ( Elf is the closest he's gotten). Ferrell is stepping into Brendan Fraser territory with Lost, and whether or not audiences will accept him as an adventurer who ends up running from dinosaurs and other creatures is one of the summer's biggest question marks. The good thing about Lost is that it places Ferrell far away from the sports comedy genre. After landing such hits as Talladega Nights: The Ballad of Ricky Bobby and Blades of Glory, the actor hit a snag with Semi-Pro last year. The basketball comedy grossed only $33.4 million domestically. Luckily, Ferrell rebounded last summer with Step Brothers, a $100.5 million domestic hit.

Considering that Lost is based on an old television show, it's certainly worth comparing it to last summer's Get Smart. Thanks to the star power of Steve Carell and Anne Hathaway, Smart opened to $38.7 million before finishing its theatrical run with $130.3 million domestically. While the PG-13-rated Lost lacks the female star power that Hathaway brought to Smart, it's safe to say that it could expect to post similar figures. Lost will represent an excellent choice for family audiences that will have already seen Night at the Museum: Battle of the Smithsonian and UP during the previous weekends. Then again, those films will also still be posting solid numbers when Lost lands in theatres, and that will ultimately hurt the film's opening.

Based on the reaction that the trailer has been receiving as well as the fact that Warner Bros. is already developing a sequel, The Hangover may become one of the summer's biggest sleeper hits.

Even though it lacks the star power of Wedding Crashers, another recent R-rated flick that revolved around debaucherous actions and tying the knot, male audiences in particular will be willing to take a chance on the film thanks to its comedic premise of a bachelor party gone wrong. Hangover star Bradley Cooper may be able to catapult his way to full-fledged leading man territory after nailing supporting roles in recent studio hits such as He's Just Not That Into You, Yes Man and even Wedding Crashers.

Crashers grossed a whopping $209.2 million in 2005, which translates to $234.4 million when adjusted for inflation. Hangover, on the other hand, probably has a very real shot at hitting $100 million, but $200 million is most likely out of the question.