UPDATED: Weekend Predictions: 'Terminator Salvation' and 'Night at the Museum: Battle of the Smithsonian'

Summer '09 will continue to go strong thanks to a crop of films opening during Memorial Day weekend. 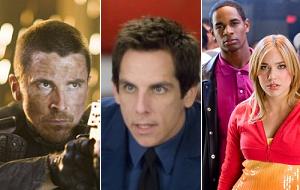 Meanwhile, as of 10 a.m. PT Night at the Museum: Battle of the Smithsonian accounts for 45% of daily ticket sales on Fandango.com, and Salvation represents 34%.

THURSDAY AFTERNOON UPDATE #2: As of 3 p.m. PT, Terminator Salvation accounted for 71% of Fandango.com's daily sales, while Night at the Museum: Battle of the Smithsonian covered 18%.

In a poll of nearly 1,000 moviegoers conducted by Fandango.com, 23% of respondents revealed that Salvation is the first film of the series they will be seeing in theatres. Additionally, 28% claimed that Christian Bale's notorious tirade on the set of the sci-fi flick actually made them more interested in seeing the film.

THURSDAY AFTERNOON UPDATE: According to Variety , Terminator Salvation made $3 million from midnight showings.

Moviegoers will have a diverse set of options at the multiplexes this Memorial Day weekend. The fourth installment of the lucrative Terminator franchise, the sequel to Night at the Museum and Dance Flick will be competing to grab as big a chunk of the summer box office as they possibly can.

Terminator Salvation, which holds the distinction of being the first film in the series with a PG-13 rating, should easily win the weekend. Salvation is opening at 3,480 locations, and it will get an early jump on the weekend thanks to midnight showings and a Thursday release. However, the Thursday release can either be a blessing or a curse. Critics have not been kind to director McG's sci-fi epic considering that it currently boasts a mediocre 38% approval rating on Rotten Tomatoes. If die-hard fans who attend the midnight shows—MovieTickets.com is reporting that at least 322 of them are already sold out—feel disillusioned, then that negative word of mouth could contaminate the film's weekend haul.

As long as audiences respond positively to Salvation, it could grab as much as $85 million by the end of the day on Monday.

PG-rated Night at the Museum: Battle of the Smithsonian will mark the first major family film of the summer and expectations are high as a result. The original NATM grossed an incredibly impressive $250.8 million domestically in 2006, after opening with $42 million over the Christmas holiday.

As of 6 p.m. PT, NATM2 was responsible for 11% of MovieTickets.com's daily sales, while as of 4 p.m. PT it represented 12% of Fandango.com's overall business. Those numbers will certainly increase as we move closer to the weekend.

If it weren't going up against the Salvation juggernaut, NATM2 's Memorial Day Weekend would be stronger. As it stands, NATM2 should be able to bring in around $61 million by Monday.

Even though Paramount has given the film a strong marketing blitz, Dance Flick is going to be drowned out by the other two blockbusters. Even though audiences may be sick of the spoof genre, Dance Flick can expect to bring in a modest $14 million during the national holiday.

Angels & Demons and Star Trek will end up very close this weekend, while X-Men Origins: Wolverine will lose even more of its core fan base to Salvation.

Check back tomorrow for our top 10 predictions as well as final location counts.