G.I. Joe: The Rise of Cobra, Julie & Julia and Shorts will all be competing for box office supremacy in August. 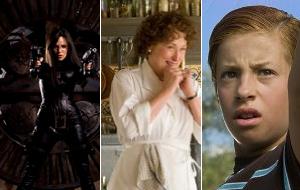 This week, B OXOFFICE has added three new films to our Anticipation Index. G.I. Joe: The Rise of Cobra, Julie & Julia and Shorts all open on August 7.

While the month of August is usually seen as a dumping ground for mediocre summer fare, in recent years such films as Superbad and The Bourne Ultimatum have won both critical praise and box office success in the waning days of the summer. This August certainly has some promising releases as well.

Paramount began its marketing blitz for G.I. Joe with a teaser spot during this year's Super Bowl, and they've been pushing the film consistently ever since. Obviously, the studio is hoping that they can turn the toy franchise into a successful film franchise in the vein of Transformers. The film has been plagued recently by some negative internet buzz, but that probably won't hurt what's sure to be a respectable opening weekend. The film will appeal mainly to male audiences who have already seen Transformers more than enough in theatres by that point in the summer. Although, if the buzz is to be believed, negative word of mouth could spread quickly and hurt the film's staying power.

Julie & Julia will represent a welcome alternative for female audiences. Moviegoers have come to trust Meryl Streep as if she's a family member, and Amy Adams is quickly building a solid reputation thanks to her roles in such hits as Charlie Wilson's War and Enchanted. Expect Julie & Julia to open strong before showing some consistent staying power.

Shorts is the latest family film from director Robert Rodriquez. The maverick helmer has been able to carve out a modest niche in that realm thanks mostly to his Spy Kids franchise. Unfortunately, Shorts will be competing for the same young male audience that G.I. Joe will be going after, and that will hurt its bottom line.

Check out our predictions for these films as well as other major summer releases in the table below.