G.I. Joe: The Rise of Cobra, Julie & Julia and A Perfect Getaway have all opened with varying degrees of success. 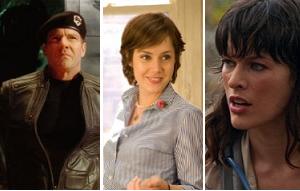 Saturday Morning Update (8:56 a.m. PT): According to B OXOFFICE.com's Early Weekend Estimates, G.I. Joe: The Rise of Cobra is on pace for $54 million this weekend. Julie & Julia is set to grab $21.5 million, while A Perfect Getaway will debut with around $6 million. Click here for the full report.

G.I. Joe 's official location count came in higher than originally estimated and it now stands at an impressive 4,007.

Check out our final predictions in the table below.

Wednesday Afternoon Update: After the disappointing performance of Funny People last weekend, three news films are poised to start August off on a positive note.

There is little doubt that G.I. Joe: The Rise of Cobra, which Paramount is opening at around 3,500 locations, is going to be the #1 film this weekend. Julie & Julia should also fare quite well, while A Perfect Getaway may struggle to find its audience.

It has certainly been an emotional roller coaster for Paramount since they debuted the first teaser trailer for G.I. Joe during the Super Bowl in February. The initial internet reaction to the teaser was skeptical, and the theatrical trailers were met with a similarly cold reception. There was also some controversy as to whether or not director Stephen Sommers had been kicked out of the editing room as he was trying to fix the movie after some allegedly disastrous test screenings. As a result of the bad press, Paramount has refused to show the film to the majority of critics, opting to show it to the likes of Chud's Devin Faraci and Aint It Cool's Harry Knowles instead. Both Faraci and Knowles gave the film positive reviews.

It's no secret that Paramount and Hasbro would like to see G.I. Joe deliver the same kind of box office results that the Transformers films have. Successfully turning another popular toy franchise into a theatrical franchise would be extremely lucrative for both companies. Still, there is certainly an undeniable lack of confidence in the film. While Michael Bay's fighting robot flicks haven't exactly won unanimous critical praise, Paramount didn't feel the need to hide them the way they have with G.I. Joe. Yet even if G.I. Joe was subject to a critical lashing, would its target demographic of teenage boys and older males who used to play with the action figures really care what critics have to say about a movie that only wants to be a fun action film?

Larry Collins, vice president, film for Carmike Cinemas, stresses that G.I. Joe is a movie that will do well in Middle America, much more so than in major markets such as New York, Los Angeles or Chicago. In other words, it's going to grab moviegoers who don't pay attention to critics anyway.

"You have certain groups of people that start wrong ideas about a certain movie and what it's trying to say. It's just entertainment, it's just a movie. And now the critics aren't offered the opportunity to say something like that," says Collins about the whole controversy surrounding the film.

"I think it's a movie people will want to go see out of curiosity," adds Collins.

Luckily for Paramount, the internet buzz may not be all negative.

"At Flixster, G.I. Joe has definitely been gaining in popularity in the last few days. Its overall activity indicates it could have a really solid performance this weekend and become a significant late-summer hit. It has definitely found its mark with male audiences—and also, significantly, with a younger female crowd, which is showing surprising interest," says John Singh, a spokesperson for Flixster.

As of 1:30 p.m. PT, G.I. Joe is responsible for 18% of daily sales on MovieTickets.com, a number that is bound to increase as the weekend draws near.

While G.I. Joe may be a bad film, initial interest should push it to an opening weekend haul of around $49 million, followed by a sharp decline in the weeks to come.

Julie & Julia, a cooking comedy from Nora Ephron, will provide a welcome alternative to the explosions and fight scenes that G.I. Joe has to offer. J & J will benefit from the fact that it stars a proven verteran in Meryl Streep and an up-and-coming draw in Amy Adams.

" Julie & Julia is definitely skewing almost completely female, with women under 25 and over 25 about equally interested," says Singh.

Expect J & J, which will land at around 2,300 locations, to open with a very respectable $21 million this weekend.

Rogue will be debuting A Perfect Getaway at around 2,000 locations. Getaway 's cast doesn't exactly carry much drawing power at the box office. Steve Zahn, Milla Jovovich and Timothy Olyphant have found success as supporting players, or, in the case of Jovovich and Olyphant, in established video game properties such as Resident Evil and Hitman, respectively, that made the jump to theaters. Getaway will represent a viable choice for adult audiences who may feel that G.I. Joe looks too campy and it could make as much as $8 million during its debut frame.

Check back tomorrow for our full Top 10 predictions as well as official location counts.