The Final Destination emerged victorious over Halloween 2 in the battle of the horror films this weekend. 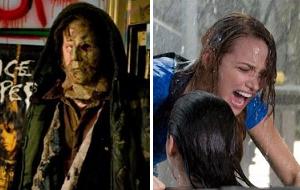 Saturday Morning Update (8:35 a.m. PT): As expected, The Final Destination is going to win the weekend. Check out the full report here .

Thursday Afternoon Update (5:15 p.m. PT): As of 4:30 p.m. PT, Fandango.com is reporting that Halloween 2 has passed The Final Destination in terms of daily sales. H2 currently stands at 22 percent, while TFD represents 17 percent. The two films are bound to finish within a couple million of each other, and either one could ultimately land in the top spot.


Wednesday Afternoon Update: While studios normally try to avoid opening movies in similar genres during the same weekend, this weekend horror buffs will be torn between Halloween 2 and The Final Destination. Meanwhile, Taking Woodstock will provide a nostalgic option for audiences who are not interested in gore and thrills. All three films will have to compete with the surprise hit that is Quentin Tarantino's Inglourious Basterds. Basterds has been posting some solid numbers after its strong opening weekend, which means that it should hold up well during its sophomore frame.

"The response to Inglourious Basterds from Flixster users has been remarkably strong," says John Singh, a spokesperson for Flixster, an online movie community with 20 million unique users per month. "The two horror films opening this weekend may have a tough time against such a well-received movie, but of the two, The Final Destination is showing a bit more strength with Flixster users than Halloween II. Both, though, look like they’re going to see good response, particularly from younger, more male-skewing audiences."

By being shown on 3D-capable screens across the country, The Final Destination will try to boost interest in the series by giving fans a new visual experience. The franchise as a whole is still going very strong considering that Final Destination 3 opened with $19.2 million in 2006 before ending its run with $54 million domestically. Plus, Lionsgate's My Bloody Valentine 3D proved earlier this year that there is a market for 3D horror films. Valentine opened to the tune of $21.2 million in January before finishing its domestic run with $51.5 million in the bank.

TFD is currently slightly outpacing H2 in terms of online ticket sales. As of 5 p.m. PT, Fandango.com is reporting that TFD is responsible for an impressive eight percent of daily sales, compared to seven percent for H2. Those numbers will both increase as the weekend draws near.

Expect TFD to win the battle of the horror films with a haul of around $25 million.

H2, which will open at around 3,000 locations, won't be too far behind. Rob Zombie's rebooting of the popular property has gone over pretty well so far considering that his first film opened with an impressive $26.4 million on its way to a respectable $58.3 million domestic haul. If H2 wasn't facing direct competition from TFD it would easily be able to match or even improve upon its predecessor's opening weekend. As it stands now, H2 will probably end up with around $21.5 million during its debut frame.

Taking Woodstock opened today in New York and Los Angeles before expanding to around 1,300 locations on Friday. While Woodstock will appeal mainly to the over-40 crowd, its young cast will help it reach out to moviegoers who weren't alive when the famous concert went down. Star Demetri Martin brings with him a solid following thanks to his successful Comedy Central show, Important Things with Demetri Martin. Emile Hirsch ( Into the Wild, Speed Racer ) also pops up in a supporting role. Woodstock should be able to round up around $6 million this weekend.

As for Basterds, a drop of less than 50% from last weekend is likely based on the the film's performance during the week. The World War II flick could finish with around $20 million during its sophomore frame.