During a typically slow Labor Day weekend, The Final Destination was able to claim the top spot. 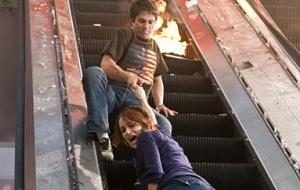 Sunday Morning Update (9:22 a.m. PT): It now looks as though The Final Destination is on pace to finish in first place over the four-day Labor Day weekend. All About Steve will debut in second, and Gamer will land in fourth. Extract, the weekend's other new wide release, is set to finish in 10th place.

Saturday Morning Update (9:26 a.m. PT): Defying expectations, All About Steve is on pace to win the weekend, while Gamer will most likely finish in fourth place. Click here for the full report.

Thursday Afternoon Update (6:20 p.m. PT): Fandango.com is reporting that as of 6 p.m. PT, Gamer is responsible for 12 percent of daily sales on Thursday.

Thursday Afternoon Update (4:44 p.m. PT): Both Gamer and All About Steve are failing to make a dent in the world of online sales. Of the two, only Gamer appears in the top five daily ranking for Thursday on Fandango.com. As of 4 p.m. PT, Gamer currently ranks in fifth place with five percent of sales. Neither film has been able to manage a spot in the top five on MovieTickets.com.

As the summer comes to a close, interest in going to the movies is waning for a small period of time.

“Summer’s unofficially over, and based on activity at Flixster, moviegoing looks like it’s going to revert back to pre-summer levels this weekend," says John SIngh, a spokesperson for Flixster, a movie community with 20 million unique visitors a month. " Gamer and All About Steve are showing moderate levels of interest compared with movies in the past few months.”

Check out our Top 10 predictions in the table below.


Wednesday Afternoon Update: This Labor Day weekend, Gamer and All About Steve will attempt to claim the top spot at the box office. Meanwhile, Extract will also try to find its niche.

Lionsgate has been pushing Gamer pretty hard with a rush of television spots and some unconventional marketing techniques. The film should appeal to action fans and its high concept premise has been presented very well in all forms of advertising.

Star Gerard Butler is coming off the commercial success of The Ugly Truth, which has grossed a solid $86.1 million this summer. While Ugly Truth obviously appealed to a different crowd than Gamer will, it served to greatly improve Butler's profile. The actor is certainly on his way to a higher level of stardom and it looks as though Gamer will help in that process.

Gamer represents the latest from Neveldine/Taylor, the filmmaking duo responsible for the two Crank films. The original Crank became something of a cult hit after grossing only $27 million domestically in 2006. However, Crank High Voltage failed to push the series forward. It stalled at the box office this past April, grossing only $13.7 million. As a result, the duo needs their latest venture to be a hit.

Gamer is opening at around 2,500 locations this weekend, which makes it the widest new release. Expect the Lionsgate flick to grab around $18 million over the four-day weekend.

All About Steve 's best asset is its cast. Sandra Bullock and Bradley Cooper have both been incredibly successful this summer thanks to The Proposal and The Hangover, respectively. The momentum that both thesps have will help propel Steve to a respectable opening, even though it hasn't received the most energetic marketing push.

The Fox release is opening at around 2,000 locations, which will put it at a disadvantage to Gamer. Still, Steve should manage to find its niche among the same audience that made Proposal a hit, and it may rake in around $16 million over the four-day weekend.

Thanks to a respected writer/director, a great comedic ensemble and an interesting premise, Extract may be able to become a cult hit even though it is only opening at 1,600 locations. Writer/director Mike Judge is no stranger to building his audience slowly in the world of film, even though he has found success much easier on television thanks to Beavis and Butthead and King of the Hill. 1999's Office Space grossed only $10.8 million domestically—$15.3 million when adjusted for inflation—before finding an impressive following on DVD and television. Similarly, Idiocracy grossed less than $500,000 domestically in 2006 before finding a second life on DVD.

Extract will mark a big test for star Jason Bateman. After delivering scene-stealing supporting turns in the likes of Hancock, Juno and State of Play, the talented actor will finally be front and center. The success or failure of Extract will determine whether or not he's allowed to stay there.

Even though it's entering a crowded marketplace during a historically slow moviegoing weekend, Extract should be able to carve out around $7 million for itself by the time Americans are ready to go back to work on Tuesday.

The Final Destination should suffer a drop of at least 50% after finishing in first place last weekend. Even though it has the 3D angle gimmick going for it, horror films notoriously fall fast.

Check back tomorrow for our complete Top 10 predictions as well as official location counts.