Couples Retreat claimed the top spot at the box office, while Paranormal Activity had a strong showing. 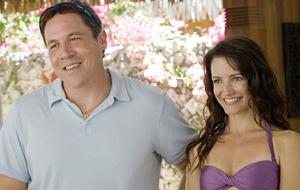 Sunday Morning Update (9:30 a.m. PT): Even though Couples Retreat finished in first place this weekend with an estimated take of $35.3 million, Paranormal Activity drew the most attention. Click here for the full report.

Paranormal Activity represents a staggering 27 percent of sales on MovieTickets.com, and 21 percent on Fandango.com. Paramount may very well have the next Blair Witch Project on their hands. The thriller is expanding to 159 locations this weekend.

Wednesday Afternoon Update: Universal's Couples Retreat is this weekend's only new wide release, and it's almost a lock for the #1 spot. The lack of competition should come as a relief for the beleaguered studio after the recent turmoil in their corporate structure.

Even though Retreat boasts a PG-13 rating, it should appeal mainly to the over-25 crowd thanks to its comedic take on marital strife.

"Adding a broad comedy like Couples Retreat to the lineup is going to help drive audiences into theaters, despite the typical autumn lull," says John Singh, a spokesperson for Flixster.

As of 4:30 p.m. PT, Couples Retreat is responsible for six percent of daily sales on both Fandango.com and MovieTickets.com. That percentage will surely increase as the weekend draws near.

Couples Retreat should be able to open with around $25 million during its debut frame.

After an assured victory at the box office last weekend, Zombieland is bound to hold its audience well during its sophomore frame. The fusion of comedy and horror is benefiting from extremely positive word of mouth, and it may mark the beginning of a lucrative franchise for Sony.

"[ Zombieland ] has a remarkably strong 89% positive rating from Flixster users who have seen it, indicating a healthy hold this weekend," says Singh.

As of 4:30 p.m. PT, Zombieland is responsible for five percent of daily sales on Fandango.com, and three percent on MovieTickets.com.

Expect Sony's sleeper hit to grab around $17 million during its sophomore weekend.

While the rest of the Top 10 will be filled with other assorted holdovers, one of the major box office stories this weekend will be happening outside of the Top 10. Paranormal Activity is building its audience slowly but surely, and its looking like it could become a grass-roots hit in the same vein as The Blair Witch Project. The thriller grossed an impressive $532,242 from only 33 locations last weekend, which has inspired Paramount to release it in an additional 40 markets this weekend.

“Overall interest and advance ticketing have definitely increased for Paranormal Activity this week thanks to positive reviews, social media buzz and the demand that Paramount has created,” says Joel Cohen, Executive Vice President and General Manager of MovieTickets.com. “The horror genre continues to be bankable and considering the other releases on deck for this weekend, Paranormal Activity could have real box office potential.”

According to Singh, Flixster interest has surged nearly 300% versus last week and the film is showing the strongest amount of curiosity among under-25 males.

Paranormal Activity should easily land within the $1 million-$1.5 million range this weekend as it continues to entice moviegoers.

Check back tomorrow for our complete Top 10 predictions as well as official location counts.