Fantastic Mr. Fox and Nine are just two of the options moviegoers will have over the Thanksgiving holiday. 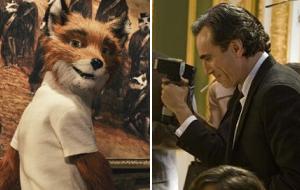 Fantastic Mr. Fox is going to be something of a difficult sell for 20th Century Fox. In a year dominated by 3D animation, Fantastic Mr. Fox, which uses stop-motion animation, may look slightly dated. Even though Coraline was able to grab a solid $75.3 million, it was also screened in 3D. Still, the all-star cast that includes George Clooney, Meryl Streep and Bill Murray will most likely hit the talk-show circuit in support of the film and the fact that it's based on Roald Dahl's classic novel will provide something of a bult-in audience.

Disney is obviously hoping that Old Dogs will follow in the footsteps of Wild Hogs, which was also shot by director Walt Becker. Hogs grossed nearly $250 million worldwide back in 2007. Dogs will go far thanks to the star power of Robin Williams and John Travolta.

The Weinstein Company is responsible for distributing Nine and The Road. While it's anchored by Daniel Day-Lewis, Nine 's female supporting cast is going to be its biggest draw. Nicole Kidman, Kate Hudson, Penélope Cruz, Marion Cotillard, Judi Dench and Sophia Loren will surely entice moviegoers.

As for The Road, its release date has been changed a couple of times and early reviews are mixed. B OXOFFICE's Pete Hammond wrote that, "With an outstanding lead performance by Viggo Mortensen and impressive production values this earnest and engrossing film will have to count on strong reviews and awards attention to lure reluctant audiences into the multiplex, but with the pre-sold value of [Cormac] McCarthy’s tome (one of Oprah’s book club recommendations), this long-delayed release could be a decent performer in a thin fall season."