Disney's A Christmas Carol and The Fourth Kind both opened with mixed results this weekend. 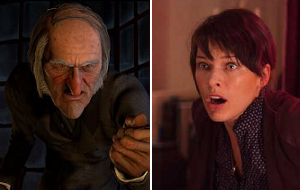 Sunday Morning Update (9:51 a.m. PT): Disney's A Christmas Carol pulled in an estimated $31 million this weekend. The Men Who Stare at Goats landed in third. The Fourth Kind and The Box opened in fourth and sixth place, respectively. Click here for the full report.

Saturday Morning Update (8:11 a.m. PT): As expected, Disney's A Christmas Carol will easily finish in first place this weekend. The Men Who Stare at Goats is set to debut in third. The Fourth Kind and The Box will finish in fourth and fifth place, respectively. Click here for the full report.

Thursday Afternoon Update (2:16 p.m. PT): As of 1 p.m. PT, MovieTickets.com is reporting that Disney's A Christmas Carol is responsible for 13 percent of daily ticket sales, while Fandango.com is reporting 12 percent.

The Fourth Kind, The Men Who Stare at Goats and The Box have all failed to make a dent on Fandango.com. Goats was able to post two percent of sales as of 1 p.m. PT on MovieTickets.com.

Michael Jackson's This Is It is still posting strong sales, and it's headed for a possible second place finish this weekend. The concert flick tallied 20 percent of sales as of 1 p.m. PT on MovieTickets, and 13 percent on Fandango.


Wednesday Afternoon Update: Moviegoers will have plenty to chose from at the multiplexes this weekend since four new films are headed into wide release.

While Disney's A Christmas Carol will be aiming for family audiences, The Men Who Stare at Goats will try to scoop up adult patrons. Meanwhile, The Fourth Kind and The Box will face off for the attention of horror enthusiasts.

Christmas Carol 's best asset is definitely the presence of Jim Carrey. While the star's dramatic turns have caused him to stumble at the box office, his track record with family-friendly material is nearly flawless. Most recently, the rubber-faced actor provided his voice to Dr. Seuss' Horton Hears a Who!, which turned into a $154.5 million domestic hit. Add to Carrey's reliability the fact that Christmas Carol is an established property, and you have a recipe for a surefire #1 opening.

Christmas Carol, which is opening at around 3,500 locations, marks the third time that director Robert Zemeckis has utilized motion capture technology in order to bring his vision to theaters. Even though certain visual aspects of 2004's The Polar Express were criticized, the film raked in $180.7 million domestically and it has also benefited from being re-released during the holidays. In 2007, Zemeckis made Beowulf, an action-packed take on the classic story that was able to rake in a respectable $82.3 million domestically.

Christmas Carol looks as though it will end up somewhere between those two films in terms of box office receipts.

Expect Christmas Carol to rake in around $43 million during its debut frame.

Coming on the heels of the success of Paranormal Activity, The Fourth Kind will offer moviegoers a similar set of thrills, except with aliens instead of demons. Star Milla Jovovich isn't exactly a heavyweight at the box office, but her Resident Evil films have gained her a certain level of trust.

The Fourth Kind could open with around $13.5 million from about 2,450 locations this weekend.

Following the success of Law Abiding Citizen, Overture will try to turn The Men Who Stare at Goats into a hit. The film's quirky subject matter will certainly limit it from becoming a huge hit. Luckily, the all-star cast led by George Clooney should help convince mainstream audiences to take a chance on an unconventional film. It will also help that the film is receiving strong critical support.

Expect Goats to grab a respectable $13 million from 2,200 locations during its opening frame.

The Box will most likely lose out to The Fourth Kind in the battle of the horror films . Even though she has appeared in some very successful projects, star Cameron Diaz is far from a sure thing at the box office. This past summer, My Sister's Keeper posted an underwhelming $49.2 million domestic haul. Unfortunately, Diaz won't receive much help from co-stars James Marsden and Frank Langella.

The Box should be able to muster around $9 million this weekend from more than 2,500 locations.

After claiming the top spot last weekend, Michael Jackson's This Is It may only drop 35 percent during its sophomore frame. According to Rentrak, the Sony release has already made $108 million worldwide.

Check back tomorrow for our Top 10 weekend predictions as well as official location counts.