UPDATED: Weekend Actuals: 'The Twilight Saga: New Moon' and 'The Blind Side'

Summit's New Moon has broken some records. Meanwhile, The Blind Side did very well. 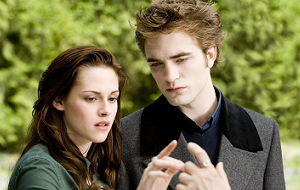 Sunday Morning Update (8:58 a.m. PT): The official studio estimate for New Moon is a staggering $140.7 million. The Blind Side was able to bring in $34.5 million in second place. Click here for the full report.

Friday Afternoon Update (12:47 p.m. PT): Based on New Moon 's impressive $26.27 million haul from midnight screenings, it's entirely possible that the Summit release could end up with as much as $115-$120 million during its debut frame if all goes well.

Transformers: Revenge of the Fallen currently boasts the strongest opening weekend tally of 2009 with $109 million.

Thursday Afternoon Update (3:23 p.m. PT): Early reports from abroad show that New Moon is already raking in impressive numbers. The vampire flick is faring the best in France, where it has tallied a solid $4.4 million.

Reviews of the film haven't exactly been glowing. New Moon currently has a 28 percent approval rating on Rotten Tomatoes . While the critical backlash certainly won't stop die-hard fans from going to theaters, it may cause moviegoers who are new to the series to think twice.


Wednesday Afternoon Update (5:13 p.m. PT): Fresh on the heels of 2012 's massive success, The Twilight Saga: New Moon will invade multiplexes this weekend. Meanwhile, Warner Bros. will release The Blind Side and Sony is sending out Planet 51.

The first Twilight film grossed nearly $384 million worldwide, and $191.4 million of that came from domestic grosses. Since then, millions of new "Twihards" have been born thanks to the availability of the DVD and the popularity of Stephenie Meyer's source novels. As a result, it is highly likely that New Moon will improve upon Twilight 's considerable haul.

Fans of the franchise are obviously anticipating packed theaters and they are doing what they can in order to avoid being turned away. New Moon is now officially the #1 advance seller of all time on both Fandango.com and MovieTickets.com. Thousands of midnight shows are already old sold out between the two ticketing sites.

“The Twilight fan base has clearly expanded since the release of the first film,” says Fandango spokesman Harry Medved. “Our ticket-buyer surveys show that a majority of fans buying tickets to New Moon got into the saga after the first film—so we’re not just talking about a cadre of book-buyers here. We’re also seeing that the movie has a wide-ranging national appeal—it’s not just a big city phenomenon—as there are sold-out showtimes in cities like Kenai, Alaska and Zanesville, Ohio."

New Moon is showing higher levels of activity than any other 2009 release on Flixster, an online movie community with 20 million unique users a month. The vampire flick is tracking 14.8 percent ahead of Harry Potter and the Half-Blood Prince and 8.8 percent ahead of Transformers: Revenge of the Fallen.

“Of course, females are the primary audience. What’s interesting to note is that under-25 females are more than twice as likely to want to see the movie as older females—who, in turn, are nearly three times as likely as men to be showing interest," says John Singh, a spokesperson for Flixster, when discussing the kind of interaction that is taking place on the popular Web site.

New Moon could end up with a debut haul of as much as $110 million from more than 4,000 locations this weekend. The current record holder for the best November opening weekend is 2005's Harry Potter and the Goblet of Fire with nearly $102.7 million, which equates to around $115 million when adjusted for inflation. In addition, a particularly strong performance could help 2009's total domestic gross reach the $9 billion mark as early as Friday night. To put that into perspective, 2008 didn't reach that plateau until December 13 and 2007 hit it on December 18.

Elsewhere in theaters, The Blind Side will represent a perfect alternative for adult moviegoers who are tired of listening to their teenage children going crazy about New Moon. Star Sandra Bullock is having a strong year. The Proposal grossed $164 million domestically, and even All About Steve managed $33.8 million despite scathing reviews and little marketing support.

Blind Side is responsible for two percent of sales as of 4 p.m. PT on Fandango, a strong number considering its competition.

Expect Blind Side to grab around $15 million during its opening frame from around 3,100 locations.

Planet 51 will have to find a sweet spot among family audiences who don't want to take their young children to see New Moon. The animated flick will face direct competition from Disney's A Christmas Carol, which is still doing well and will continue to do so right up until Christmas.

Planet 51 could manage to rake in around $13 million this weekend from around 2,600 locations.

2012 should be able to maintain a solid amount of its opening weekend audience. The disaster flick will still have a strong appeal among male moviegoers who aren't the least bit interested in a love triangle built around a human, a vampire and a werewolf. Expect the Sony release to finish with around $27.5 million during its sophomore frame.

Check back tomorrow for our full Top 10 predictions as well as official location counts.