UPDATED: Weekend Estimates: 'The Princess and the Frog' and 'The Blind Side'

A new Disney fairy tale and a sports drama have posted mixed results at the box office this weekend. 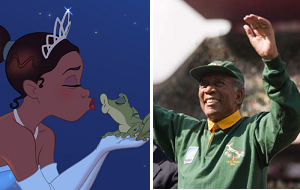 Sunday Morning Update (9:21 a.m. PT): According to studio weekend estimates, The Princess and the Frog ended up with $25 million this weekend. Invictus grabbed slightly more than $9 million. Meanwhile, Up in the Air and The Lovely Bones both posted location averages of more than $30,000. Click here for the full report.

Saturday Morning Update (9:24 a.m. PT): The Princess and the Frog is on pace for $24.5 million this weekend, while Invictus should grab around $9.5 million. Click here for the full report.

Thursday Afternoon Update (5:39 p.m. PT): As of 4:30 p.m. PT, Fandango.com is reporting that The Princess and the Frog is responsible for 41 percent of daily sales, while MovieTickets.com is reporting 39 percent. According to Flixster, young females are showing nearly twice as much interest in the film as 25-and-older females.

Invictus represents six percent on Fandango.com, but it has yet to crack the top five on MovieTickets.com. Since it skews older, Invictus is not the type of movie that is expected to sell well online. Even so, Clint Eastwood's latest is still likely to finish behind Blind Side this weekend.

Check out our final predictions for the weekend in the table below.


Wednesday Afternoon Update (3:04 p.m. PT): This weekend, Disney's The Princess and the Frog will go wide after playing at only two locations for the past two weeks. Meanwhile, Warner Bros. will send out Clint Eastwood's Invictus.

Considering that Fantastic Mr. Fox landed with a thud when it was released wide around Thanksgiving, Disney has the family market cornered this holiday season. A Christmas Carol is showing strong staying power, and now Princess and the Frog is poised to easily claim the top spot.

Much attention has been paid to the fact that Princess and the Frog marks a return to traditional animation, and it certainly represents a minor gamble on the part of the Mouse House. Audiences have overwhelmingly endorsed 3D flicks in 2009, and the decade has been dominated by computer-animated films. Still, a powerful story transcends any technological advancements and no studio does princess stories better than Disney.

As of 2 p.m. PT, Fandango.com is reporting that Princess and the Frog is responsible for 31 percent of sales, while MovieTickets.com is reporting 29 percent. Those numbers should increase as the weekend draws near.

Expect Princess and the Frog to grab $27 million from more than 3,300 locations this weekend.

After finally reaching the #1 spot last weekend, The Blind Side should be able to land in second place this weekend. Extremely positive word of mouth has helped the inspirational sports drama maintain its audience for much longer than anticipated. The Warner Bros. release could add another $14 million to its already impressive haul this weekend.

Invictus looks poised for a third place finish this weekend. Early reviews for the film have not been overwhelmingly positive, and a story about rugby and South African politics may not catch on as well with American moviegoers as it will abroad. Even so, Clint Eastwood, Morgan Freeman and Matt Damon have earned more than enough trust from mainstream audiences to ensure a respectable opening.

Expect Invictus to bring in $13.5 million from around 2,150 locations.

Paramount will send out The Lovely Bones to three locations this weekend. Even though the film hasn't received many glowing reviews, its bound to post a very healthy location average thanks to the popularity of the source novel, its cast and director Peter Jackson.