Avatar, The Squeakquel and Sherlock Holmes remained strong at the box office on Monday.

Tuesday Morning Update (10:40 a.m. PT): Grosses continued to soar on Monday as Avatar took in an additional $19.418 million to remain in first place for the day. Alvin and the Chipmunks: The Squeakquel was up one spot to finish in second with $12.097 million, while Sherlock Holmes finished in third with an estimated $11.190 million. 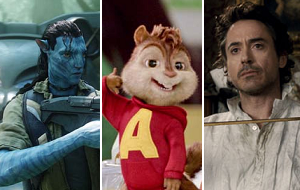 Monday Afternoon Update (12:26 p.m. PT): 20th Century Fox is reporting that Avatar grossed $75.617 million over the weekend, while Alvin and the Chipmunks: The Squeakquel grabbed $48.875 million. Click here for the full report.

Sunday Morning Update (8:07 a.m. PT): According to studio estimates, Avatar was able to finish in first place this weekend with a staggering $75 million. Sherlock Holmes landed in second place with $65.380 million, while Alvin and the Chipmunks: The Squeakquel grabbed $50.2 million in third. Click here for the full report.

Saturday Morning Update (9:20 a.m. PT): As long as estimates don't fall too much between now and Monday, this weekend will set a new record for the largest domestic cume. The July 18-20, 2008 frame still technically holds the record with $260 million, but this weekend could exceed $270 million in grosses. Click here for the full report.

Saturday Morning Update (7:43 a.m. PT): According to Warner Bros., Sherlock Holmes grossed $24.860 million on Christmas Day, which means that it will be directly competing with Avatar for the #1 spot over the weekend. More numbers coming soon.

Wednesday Afternoon Update (3:29 p.m. PT): As of 2 p.m. PT, Fandango.com is reporting that Alvin and the Chipmunks: The Squeakquel is responsible for 43 percent of daily sales, while Avatar boasts 39 percent. Sherlock Holmes is making its presence known with five percent.

Interest in Avatar remains high despite the rush of new releases. Flixster is reporting that searches for the sci-fi flick have increased 100 percent, and that female moviegoers are showing more enthusiasm.

"Again, the biggest issue facing audiences isn't quality-it's quantity," says John Singh, spokesperson for Flixster. "There's a lot to see and a limited time to see it, so moviegoers are really turning to the Internet to get recommendations, read reviews and make their decisions, and with just a week and a half or so for winter break, they're making those decisions carefully."

Thursday Morning Update (11:41 a.m. PT): Avatar was able to grab another $16.086 million domestically, so it will have a ton of momentum heading into the holidays.

Fandango.com is reporting that as of 11 a.m. PT Alvin and the Chipmunks: The Squeakquel is responsible for 52 percent of sales, while Avatar boasts 33 percent.

Check back soon for our top 10 predictions as well as official location counts.

Wednesday Afternoon Update (5:31 p.m. PT): Two radically different films are being released wide on December 23. One is about a group of talking chipmunks, and the other is about a man who is paid to fire people. Both movies will try to scoop up as much cash as they can before It's Complicated, Sherlock Holmes and Nine (which performed well last weekend at four locations) are unleashed to the entire country on Christmas Day. Of course, all five films will have to watch out for the Na'vi.

Even with tons of new competition, it looks as though Avatar should easily reclaim the top spot this coming weekend. The sci-fi extravaganza is benefiting from extremely positive word of mouth, and it delivered a strong hold of $16.385 million on Monday. The film's performance on Tuesday will give a better indication of how it will fare during its sophomore frame, but the smart money is on another #1 finish.

MovieTickets.com is reporting that as of 4 p.m. PT, Avatar is responsible for 68 percent of sales, while it boasts 66 percent on Fandango.com.

With a domestic haul of $217.3 million, Alvin and the Chipmunks turned out to be one of 2007's biggest hits. It comes as little surprise that 20th Century Fox quickly turned around a sequel, and the studio can take pride in the fact that will dominate the holiday weekend thanks to The Squeakquel and Avatar.

On Fandango.com, The Squeakquel is outpacing such kid-friendly fare as UP, Night at the Museum: Battle of the Smithsonian and Ice Age: Dawn of the Dinosaurs at the same point in the sales cycle, which makes it the top-selling family film of the year on the ticketing site. Fandango is reporting 15 percent of sales as of 4 p.m. PT, while MovieTickets is reporting 13 percent.

Activity on Flixster has shot up 168 percent since last week for The Squeakquel, and said activity has revealed some interesting bits of information.

"The Squeakquel is appealing most strongly to younger female audiences, and Fox certainly seems to know that by emphasizing the cute girl chipmunks in its marketing," says John Singh, a spokesperson for Flixster.

If the addition of The Chipettes brings in a sizable female audience, then The Squeakquel has a very real shot at topping its predecessor.

Expect Alvin and the Chipmunks: The Squeakquel to grab around $44 million from Friday to Sunday and $60 million from Wednesday to Sunday. The film is starting out at 3,656 locations on Wednesday, but it may expand to more on Friday.

Up in the Air has been performing quite well in limited release. The latest flick from director Jason Reitman (Juno) was able to grab nearly $2.4 million from only 72 locations last weekend. On Wednesday, it will expand to 1,895.

Up in the Air is viewed as one of the strongest contenders for the Best Picture Oscar, which will make it a must-see film for a lot of viewers. The George Clooney vehicle will play very well with adult audiences, but it'll have an incredibly tough time crossing over into teenage demographics. Even though her performance in the film is winning tons of praise, Twilight supporting player Anna Kendrick probably won't bring many "Twihards" with her.

Flixster has seen a 140 percent increase in activity for Up in the Air since last week, which is reassuring since interest in Nine has actually decreased.

Wednesday and Thursday will be crucial days for Up in the Air, because it's going to face tough competition from It's Complicated and Nine.

Check back tomorrow for our It's Complicated, Sherlock Holmes and Nine predictions.