BOXOFFICE Forecast: 'Tyler Perry's Why Did I Get Married Too?,' 'The Last Song,' 'Diary of a Wimpy Kid' and 'Repo Men'

Miley Cyrus will try to find success again in this April's The Last Song. The film opens during a crowded weekend. 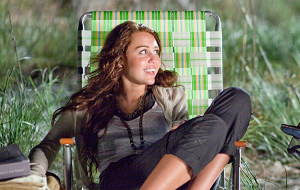 UPDATED: Diary of Wimpy Kid's release date has been pushed forward to March 19.

This week, we've added Tyler Perry's Why Did I Get Married Too?, The Last Song, Diary of a Wimpy Kid and Repo Men to our Anticipation Index. All four films are set to hit theaters on April 2.

Tyler Perry is coming off of a banner year in 2009. Madea Goes to Jail became his biggest box office success to date with a domestic haul of $90.5 million, and I Can Do Bad All by Myself posted a respectable $51.7 million. The multihyphenate also helped Precious: Based on the Novel "Push" by Sapphire find a larger audience by attaching his name to it. And, not to be forgotten, is his small role in Paramount's Star Trek. Perry has built an incredibly loyal fan base for himself, and there's no reason to expect that they won't turn out again for his latest effort. The original Why Did I Get Married? snagged $55.2 million domestically, so the sequel should also finish somewhere in that vicinity.

There's no doubt that as her audience grows up, Miley Cyrus will start to lose her box office clout and therefore be forced to transition into a new phase of her career. Last year, The Hannah Montana movie delivered a solid $79.6 haul, so Cyrus still has a lot of momentum. The Last Song will also benefit from the fact that it is based on a Nicholas Sparks (The Notebook, Dear John) novel. Expect the Disney release to post healthy numbers.

Diary of a Wimpy Kid marks another adaptation of a popular literary series aimed at younger readers. It will certainly have a strong appeal among teenage boys who wouldn't be caught dead seeing The Last Song. Yet the 20th Century Fox release will have a tough time finding crossover appeal, which means that it will need to rely on fans seeing it multiple times in order to become a hit.

Repo Men looks like it's going to get lost during a very crowded weekend. Sci-fi enthusiasts may be enticed, but stars Jude Law and Forest Whitaker are far from reliable draws.

Check out our predictions for Tyler Perry's Why Did I Get Married Too?, The Last Song, Diary of a Wimpy Kid and Repo Men as well as other films in the table below.