Avatar is #1. Daybreakers, Leap Year and Youth in Revolt opened to mixed results. 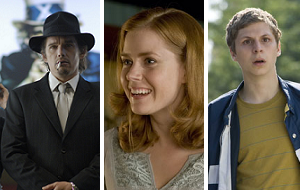 Sunday Morning Update (9:45 a.m. PT): 20th Century Fox is reporting that Avatar tacked on another $48.5 million this weekend, pushing its domestic haul to $429 million. Daybreakers opened in third with $15 million, and Leap Year debuted to $9.2 million. Click here for the full report.

Saturday Morning Update (8:47 a.m. PT): 20th Century Fox is reporting that Avatar snagged another $13.3 million on Friday, which means that it's on pace for a healthy $46 million during its fourth frame. Daybreakers will debut in third, while Leap Year and Youth in Revolt are on pace to finish outside of the top five. Click here for the full report.

Thursday Afternoon Update (3:25 p.m. PT): Avatar is certainly maintaining a healthy audience both domestically and abroad. It posted a $6.9 million domestic haul on Wednesday, which marked a five percent bump from Tuesday. It's looking like it will be another healthy weekend at the box office for James Cameron's sci-fi extravaganza.

As of 3 p.m. PT, MovieTickets.com is reporting that Avatar is responsible for a whopping 79 percent of sales. Sherlock Holmes boasts 4 percent, and Alvin and the Chipmunks: The Squeakquel, It's Complicated and Daybreakers are tied at two percent. Leap Year and Youth in Revolt failed to make it into the top five on the ticketing site.

Wednesday Afternoon Update: This weekend, moviegoers will have a couple of new releases to choose from. Daybreakers, Leap Year and Youth in Revolt are all opening wide. Yet multiplexes across the country will be dominated once again by the phenomenon that is Avatar. James Cameron's sci-fi epic is guaranteed to spend its fourth straight weekend on top of the box office.

Avatar is reaching unprecedented levels of popularity, and the fact that January is typically a slow month means that its dominance will continue for a little while yet. The 20th Century Fox release will cross the $400 million domestic plateau with room to spare this weekend. At this point, it looks as though Avatar could even surpass The Dark Knight's $533.3 million domestic haul, which means that Cameron would hold the top two spots on the unadjusted all-time list.

As of 4 p.m. PT, MovieTickets.com is reporting that Avatar is responsible for a staggering 84 percent of daily sales. Daybreakers, Leap Year and Youth in Revolt have yet to break into the top five on the ticketing site.

Expect Avatar to add another $47 million to its already impressive haul.

Lionsgate is sending Daybreakers out with the intention of tapping into the recent vampire craze. The Twilight series as well as HBO's True Blood have shown that there's a strong level of interest in vampire tales that shake things up a bit. With a plot that focuses on a world full of vampires, Daybreakers certainly offers a new angle.

Then again, Cirque Du Freak: The Vampire's Assistant proved that the trend is far from foolproof last October. The Universal release was able to muster only $13.9 million domestically during its brief theatrical run.

The audience for Daybreakers is also likely to skew heavily male, which means that it will have to compete directly with Avatar.

"Without competition, Daybreakers would look fairly strong, but the December releases are still so popular," says John Singh, a spokesperson for Flixster. Daybreakers is showing only half of the activity that Avatar, Sherlock Holmes and Alvin and the Chipmunks: The Squeakquel are still delivering on the popular Web site.

Expect Daybreakers to debut with $15 million from around 2,400 locations.

Amy Adams will try to establish herself as a bigger box office draw with Leap Year. The young actress will be carrying the film by herself since co-star Matthew Goode hasn't made the transition yet from reliable character actor to leading male.

Leap Year will represent a perfect choice for twentysomething couples on dates. The trailers have done an excellent job at conveying the film's high-concept premise, and moviegoers will be expecting a standard romantic comedy.

Interestingly enough, Universal will be competing with itself since Leap Year and It's Complicated both appeal to similar demographics.

Leap Year should be able to carve out $11.5 million from around 2,400 locations.

Michael Cera's drawing power will be put to the test with Youth in Revolt. This may not be the best weekend for The Weinstein Company to release the comedy, because it is aiming for the same male audience that will flock to either Avatar or Daybreakers. Youth in Revolt will have to settle for what's left.

Expect Youth in Revolt to post $9 million from 2,000 locations.