UPDATED: Weekend Estimates: 'The Book of Eli,' 'Avatar' and 'The Spy Next Door'

The Book of Eli and Avatar are posting strong numbers. The same can't be said of The Spy Next Door.

Monday Morning Update (8:00 a.m. PT): 20th Century Fox is reporting an estimated four-day haul of $54.6 million for Avatar, which pushes its domestic cume to $505 million. As for The Book of Eli, Warner Bros. is estimating an impressive $38 million. Click here for the full report. 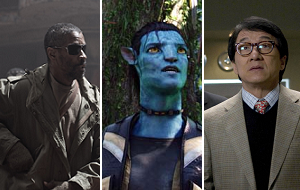 Sunday Morning Update (8:30 a.m. PT): 20th Century Fox is estimating that Avatar will bring in $41.3 million from Friday to Sunday. The Book of Eli is on pace for $31.6 million, and The Lovely Bones is doing quite well. Unfortunately, The Spy Next Door has landed with a thud.

Saturday Morning Update (9:16 a.m. PT): Avatar is on pace for another #1 weekend despite the fact that The Book of Eli made more on Friday. Meanwhile, The Spy Next Door is looking like a dud.

Wednesday Afternoon Update: This weekend, The Book of Eli and The Spy Next Door are opening in wide release, while Peter Jackson's The Lovely Bones will finally expand to more theaters. Yet the three films will have a tough time edging Avatar off its pedestal during the Martin Luther King, Jr. Day holiday weekend.

Avatar's domestic cume has exceeded $440 million, and the international haul is more than $930 million. The 20th Century Fox release is showing some signs of slowing down, but its still maintaining a very healthy amount of its audience. James Cameron's sci-fi extravaganza will next try to topple The Dark Knight's domestic haul of $533.345 million, and Titanic's unadjusted worldwide cume of $1.842 million is also in its sites.

The four-day weekend will definitely mean that Avatar's fifth frame won't drop too much from the $50.3 million it brought in last weekend.

Expect Avatar to add $43.5 million domestically over the holiday frame.

The Book of Eli will try to make mainstream audiences interested in the end of the world when it opens at more than 3,000 theaters. Unless the apocalypse features spectacular special effects (see 2012 and The Day After Tomorrow), it hasn't turned out be a very profitable topic at multiplexes. Children of Men, Doomsday and The Road are three recent examples of how the genre has landed with a thud.

The star power of Denzel Washington will help to reverse that trend. Washington may not be one of the biggest box office draws working today, but he's certainly one of the most reliable.

As of 4 p.m. PT, Fandango.com is reporting that The Book of Eli is responsible for a modest three percent of daily sales, while MovieTickets.com is reporting two percent. That number could see a nice little boost on Thursday as more moviegoers begin to plan for the weekend.

Look for Eli to snag $32 million during its extended debut frame.

Jackie Chan steps into the world of family films with The Spy Next Door. Even though Alvin and the Chipmunks: The Squeakquel is still posting solid numbers, there will be more than enough room for Spy to deliver. If the film posts solid numbers, it will bode well for Chan's upcoming turn in The Karate Kid.

The Spy Next Door could grab around $20 million from 2,924 locations during the four-day weekend.

The Lovely Bones has managed a paltry $459,428 from three locations since opening on December 11. The Paramount release isn't picking up much Oscar buzz, and moviegoers who haven't read the source novel may not be too interested in it. Still, Peter Jackson has earned the trust of millions of Lord of the Rings fans, and a decent amount of them may turn up for this weekend's expansion.

As of 4 p.m. PT, Fandango.com is reporting that The Lovely Bones is responsible for two percent of daily sales. It hasn't cracked the top five on MovieTickets.com yet.

The Lovely Bones could post around $15 million from 2,400 locations as it lands in theaters across the country.

Check back tomorrow for our full top 10 predictions as well as official location counts.