Green Zone and Remember Me will try to do some damage at the box office in March.

This week, we've added Green Zone and Remember Me to our Anticipation Index. The two films are set to hit theaters on March 12. 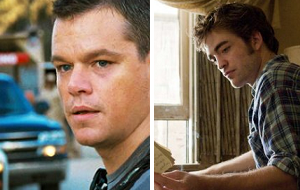 If any director/star combo can make mainstream audiences interested in a story about the Iraq war it would be Paul Greengrass and Matt Damon. The duo has found immense success together with two of the three Bourne films. If moviegoers see Green Zone as something that will provide the same level of thrills as those hits, then the Universal release could be one of the first serious commercial hits about the war. Then again, if audiences smell the political concerns a mile away the film could suffer the fate of The Hurt Locker, which is beloved by critics but has only grossed $12.7 million domestically.

Remember Me will be the first major test of Robert Pattinson's drawing power outside of the Twilight franchise. Audiences may not be ready to accept the young actor in any other role since he's still in the middle of Summit's vampire saga. If Remember Me does manage to find a sizable audience, then it will definitely bode well for Pattinson's post-Twilight career.

Check out our predictions for Green Zone and Remember Me as well as other films in the table below.