A story about two young lovers is the movie that finally brought Avatar's historic run at #1 to an end. 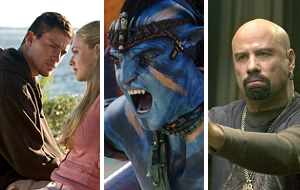 Sunday Morning Update (8:48 a.m. PT): According to studio weekend estimates, Dear John was able to grab an impressive $32.4 million this weekend. Avatar managed $23.6 million, while From Paris with Love opened to a medioce $8.12 million.

Saturday Morning Update (9:10 a.m. PT): While Dear John is off to a great start, From Paris with Love has landed with a thud.

Saturday Morning Update (8:15 a.m. PT): Based on BOXOFFICE.com's Early Weekend Estimates, it appears that Dear John is on pace for a healthy debut of $32.5 million. If that estimate holds, Dear John will not only top the $31.1 million haul of Hannah Montana/Miley Cyrus: The Best of Both Worlds to claim the #1 Super Bowl weekend opening, but it will also become the strongest debut that Screen Gems has ever had. The Exorcism of Emily Rose currently holds the record for the distributor with $30.054 million.

Check back soon for more numbers...

An impending winter storm on the East Coast could put a damper on the weekend's grosses if it hits hard enough. That's not a good sign considering that movie theaters have enough to compete with thanks to the Super Bowl.

Thursday Morning Update (9:52 a.m. PT): As of 9 a.m. PT, Fandango.com is reporting that Dear John is responsible for 51 percent of daily sales, while Avatar boasts 31 percent.

Wednesday Afternoon Update (6:03 p.m. PT): This weekend, Amanda Seyfried and Channing Tatum will try to boost their box office clout, while John Travolta steps into a villainous role once again. Dear John and From Paris with Love will take a lot of attention away from Avatar, and Dear John seems poised for an upset victory. All three films will have to compete with the Super Bowl on Sunday.

Online activity points to a high level of anticipation for Dear John. The film is registering a lot of interest on Twitter, which is a sign that it's going to do very well with teenagers and twentysomethings.

Dear John is also showing a lot of traction on Flixster. According to spokesperson John Singh, "Under-25 females are five times as interested as under-25 males, and the number of young females expressing want-to-see for the film at Flixster is the highest for that demographic group than any film since Avatar."

Considering that Dear John appeals to younger moviegoers who tend to rush out opening night, it's bound to have a lead over Avatar on Friday. Yet Avatar will most likely win Saturday, and both films will be hurt by the Super Bowl on Sunday. Dear John will probably be hurt less since it won't need to rely on male moviegoers nearly as much as Avatar does.

Dear John should debut with $25 million from around 2,500 locations, which could very well be enough for a #1 finish.

Avatar enjoyed another rush of publicity this week as a result of receiving nine Oscar nominations and passing Titanic's unadjusted domestic haul. While the sci-fi epic is guaranteed to hit $650 million domestically, it will have a tougher time reaching $700 million because February 12 will see the release of three strong films: Valentine's Day, The Wolfman and Percy Jackson & the Olympians: The Lightning Thief.

Expect Avatar to tack on another $24 million this weekend.

Since From Paris with Love is bound to skew male, it will need to grab as much cash as it can on Friday and Saturday. The film is directed by Pierre Morel, whose Taken debuted to an impressive $24.7 during 2009's Super Bowl weekend. From Paris with Love should be able to capture a decent fraction of that audience, but it will still be overshadowed by Avatar.

The fact that Morel's film didn't break into the top five on either Fandango.com or MovieTickets.com on Wednesday does not bode well.

Expect From Paris with Love to debut to $12 million from approximately 2,600 locations.

Oscar nominees should see a boost in attendance this weekend, especially the smaller films that mainstream audiences may not have paid that much attention to. Sony Pictures Classics will unleash An Education to around 760 locations now that it has secured a Best Picture nomination. Meanwhile, Fox Searchlight is expanding Crazy Heart to more than 500 locations. The tale of a country singer who finds redemption will benefit from the acting nominations that Jeff Bridges and Maggie Gyllenhaal secured.

Singh reports that activity on Flixster for An Education jumped 144 percent from the previous week, and Crazy Heart saw an 88 percent increase.