Monday Afternoon Update (1:47 p.m. PT): Paramount is reporting that Shutter Island did slightly better than estimates had anticipated. The actual weekend gross is $41,062,440. 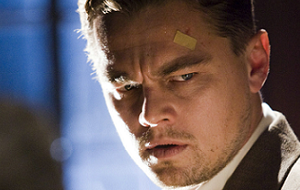 Saturday Morning Update (8:50 a.m. PT): Paramount is reporting that Shutter Island grossed an estimated $14.1 million of Friday. According to BOXOFFICE.com's Early Weekend Estimates, that means the thriller is on pace for a $38 million weekend. Without adjusting for inflation, that sets personal records for Martin Scorsese and Leonardo DiCaprio.

Thursday Afternoon Update (3:43 p.m. PT): Paramount is obviously feeling very confident about Shutter Island, because even though the thriller was initially intended for a 2,500 location opening, it will now be released to an impressive 2,991.

As of 3:30 p.m. PT, Fandango.com is reporting that the latest Martin Scorsese/Leonardo DiCaprio collaboration is responsible for 27 percent of daily sales, while MovieTickets.com is reporting 20 percent. Those are strong numbers for a film that is going skew older.

Wednesday Afternoon Update (5:16 p.m. PT): Martin Scorsese and Leonardo DiCaprio have teamed up for the fourth time on Shutter Island, a new thriller that should do some serious damage at the box office this weekend. Meanwhile, Valentine's Day, Percy Jackson and the Olympians: The Lightning Thief and The Wolfman will try to post solid second weekend numbers.

Even if Shutter Island wasn't the only new wide release hitting theaters, it would still be a dominant force. The pairing of Scorsese/DiCaprio has been a successful one both artistically and financially. The duo's biggest hit is The Departed, a Best Picture winner that grossed nearly $300 million worldwide. While their latest effort probably won't do quite as well, it certainly has a lot going for it. Critics are calling Shutter Island one of the most commercial films of Scorsese's illustrious carer, and its mysteries may also encourage multiple viewings.

As of 4 p.m. PT, Fandango.com is reporting that Shutter Island is responsible for a healthy 12 percent of daily sales, while MovieTickets.com is reporting eight percent. Those numbers are sure to increase as more moviegoers begin to plan for the weekend.

Shutter Island should manage $35 million from more than 2,500 locations during its debut frame.

After a strong opening weekend, Valentine's Day looks to be poised for a massive drop this weekend. Critics trashed it, and general audiences don't seem to be too enthused either. The romantic comedy has tallied a relatively mediocre rating of 67 percent with Flixster users. Any holiday-themed flick has a short shelf live in theaters after its holiday is over, and Valentine's Day won't be the exception to the rule.

Expect Valentine's Day to tack on an extra $21.5 million this weekend.

Percy Jackson and the Olympians: The Lightning Thief will probably hold up the best out of the three flicks that opened last weekend. It boasts a 70 percent approval rating on Flixster, and its the kind of film that encourages repeat viewings by passionate fans of the source novels.

Percy Jackson looks to be on pace for $17.5 million this weekend.

The Wolfman is going to be hurt the most by the emergence of Shutter Island, since both films are aimed at cinematic thrill seekers. It also doesn't help that the Universal thriller isn't going over too well with moviegoers. It currently has a weak 51 approval rating on Flixster. Horror films tend to fall pretty fast, and The Wolfman doesn't look like it'll be able to avoid that trend.

The Wolfman should post a sophomore haul of $13.5 million.