UPDATED: Weekend Actuals: 'Shutter Island,' 'Cop Out' and 'The Crazies'

Shutter Island managed to hold on to the #1 spot, while Cop Out and The Crazies posted solid numbers. 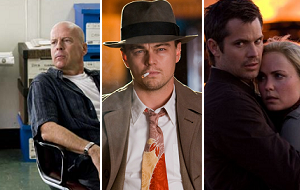 Sunday Morning Update (8:33 a.m. PT): Paramount is reporting a $22.2 million sophomore haul for Shutter Island. As for Cop Out, Warner Bros. is estimating $18.565 for the weekend. The Crazies posted a respectable $16.521 million.

Saturday Morning Update (8:36 a.m. PT): Paramount is reporting that Shutter Island has grossed $6.680 million on Friday. According BOXOFFICE.com's Early Weekend Estimates, that puts the thriller on pace for a $22 million weekend.

As for Cop Out it looks like it will open to $17.5 million, while The Crazies should post around $13.5 million.

Thursday Afternoon Update (3:12 p.m. PT): As of 2:30 p.m. PT, Fandango.com is reporting that Shutter Island is responsible for 14 percent of daily sales. Alice in Wonderland leads with 33 percent, and Avatar boasts 23 percent. Avatar will certainly hit the $700 million mark this weekend. Cop Out and The Crazies have both failed to crack into the top five sellers list, which is not a good sign.

Wednesday Afternoon Update (5:03 p.m. PT): This weekend, Cop Out and The Crazies will try to do some damage at the box office, but neither film is likely to reach the #1 spot. Shutter Island has been performing quite well since opening last weekend and it looks poised for another first place finish.

Even though thrillers tend to drop quite a bit during their sophomore frames, Shutter Island has a pedigree that will help it avoid that negative trend. The film's twist ending will also lend itself well to repeat viewings.

Expect Shutter Island to rake in another $22.5 million this weekend.

Cop Out represents a big test for director Kevin Smith. The comedy has received a strong marketing push from Warner Bros., and that means Smith will need to reach an audience outside of his loyal fan base to meet expectations. Without adjusting for inflation, Smith's highest grosser is 2008's Zack and Miri Make a Porno with $31.5 million. When adjusting, Dogma is the best with approximately $45.4 million. Cop Out will need to gross more than $45 million to be viewed as a success. Unfortunately, early word of mouth on the film is not very strong, and critics are already trashing it. Cop Out is the first feature that Smith did not write himself, so stepping outside of his comfort zone may have hurt him.

As of 4:30 p.m. PT, Cop Out hasn't broken into the top five daily sales list on either Fandango or MovieTickets. Smith's film could still show up on Thursday as more moviegoers plan for the weekend.

Cop Out should rake in $16.5 million from more than 3,100 theaters during its debut frame.

The Crazies is going to have a tough time competing with Shutter Island for the attention of cinematic thrill seekers. It also won't help that the Overture release has not had the benefit of an aggressive marketing campaign.

"The Crazies has some pretty decent want-to-see interest, though overall activity for the title is moderate," says Flixster spokesperson John Singh when discussing the kind of attention that is being paid to the film on the popular Web site.

Fandango and MovieTickets are reporting that The Crazies failed to post numbers strong enough to put it in the top five sellers list on Wednesday.

Expect The Crazies to bank a respectable opening weekend haul of $13.5 million from around 2,400 locations.