Early Weekend Predictions: 'How to Train Your Dragon' and 'Hot Tub Time Machine'

A story about a friendly dragon and a comedy about four friends transported to the 80s will try to claim the top spot. 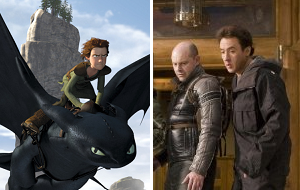 This weekend, How to Train Your Dragon and Hot Tub Time Machine should do quite quite well considering that they won't be competing for the same type of moviegoer. Alice in Wonderland's reign at #1 will definitely come to an end.

Paramount/DreamWorks Animation watched Monsters vs. Aliens open to $59.3 million during the weekend of March 27-29 last year, and they'll be hoping that How to Train Your Dragon will be able to deliver comparable numbers. Yet even though reviews for the new 3D flick are strong, Dragon doesn't boast an ensemble that is as impressive as M vs. A's. The presence of Kiefer Sutherland, Paul Rudd, Seth Rogen and Stephen Colbert undoubtedly helped bring in more adult moviegoers to M vs. A. While Dragon does feature a bunch of Judd Apatow veterans such as Jay Baruchel and Jonah Hill as well as Gerard Butler and America Ferrera, it just doesn't have the same level of star power needed to give it a boost in other demographics. This means that even though Dragon may open to weaker numbers than M vs. A, it could end up doing better in the long run. M vs. A was met with mixed reviews and mediocre word of mouth.

As of 4 p.m. PT, MovieTickets.com is reporting that Dragon is responsible for 20 percent of daily sales, while Fandango.com is reporting 19 percent. Those numbers should see a slight boost as more families begin to plan for the weekend.

"Audience interest in How to Train Your Dragon is concentrated in the under-25 set (both males and females), with older males are showing just a little bit of interest," says John Singh, a spokesperson for Flixster, when discussing the kind of activity taking place on the popular Web site.

Expect How to Train Your Dragon to easily finish in first place with a healthy $46 million from around 3,000 locations.

After finishing in first place for three weekends in a row, Alice in Wonderland will surely fall to second place this weekend. It has definitely had a good run at the top. The Disney release is close to hitting the $300 million mark domestically, and it already has brought in more than $300 million abroad.

AiW will suffer from the fact that How to Train Your Dragon is going to scoop up some coveted 3D screens. As the exhibition industry ramps up its digital expansion, this will stop being a concern. Unfortunately, both films are losing out on some profits as a result of the bottleneck that's occurring. The situation will only get worse next weekend when Warner Bros. unleashes Clash of the Titans in 3D.

Expect Alice in Wonderland to post another $17 million during its fourth frame.

MGM has wisely built a strong web campaign around Hot Tub Time Machine, with an emphasis on Twitter and Facebook. It's an essential move since the distributor isn't exactly flush with profits at this point in its history.

Says Singh, "Direct searches for [Hot Tub Time Machine] are up more than 150% this week, and the interest is driven at least in part by strong early reviews-its Rotten Tomatoes Tomatometer reading is at 80% as of this afternoon. Want-to-see levels are very strong, particularly among male audience segments."

Considering that Alice in Wonderland has dominated the top of the box office for the last three weekends, the market is ready for an R-rated comedy. Male moviegoers should turn out in solid numbers for a flick that has a dirty sense of humor. And while Hot Tub will likely turn into something of a sleeper hit, comparing it to The Hangover is setting expectations far too high. The Hangover made $45 million during its opening weekend, and if Hot Tub can muster that much during its entire domestic run it'll be viewed as a success.

While the internet is certainly abuzz with talk of Hot Tub, there's always the possibility of a backlash. Remember Snakes on a Plane? That flick created a palpable internet frenzy, but it only opened to $15.2 million before quickly exiting theaters.

Hot Tub has yet to crack into the top five on either Fandango or MovieTickets. If it doesn't have an impact in the world of online sales by Thursday afternoon then that could mean an underwhelming opening is on the horizon.

Hot Tub Time Machine should debut to the tune of $16.5 million from around 2,750 locations.

Check back tomorrow for our final top 10 predictions as well as official location counts.

Tags: How to Train Your Dragon, Alice in Wonderland, Hot Tub Time Machine