Disney's Alice in Wonderland has set a handful of records, while Brooklyn's Finest is also performing well. 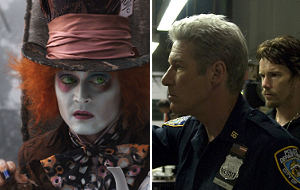 Sunday Morning Update (8:47 a.m. PT): Disney's Alice in Wonderland is set for a debut haul of $116.3 million, according to studio estimates. That means the 3D flick will now hold a handful of records: the strongest debut of any 3D film, the #1 non-sequel opening, the healthiest opening in March, the best debut of Tim Burton's career and the #1 IMAX opening of all time.

Saturday Morning Update (9:04 a.m. PT): Disney's Alice in Wonderland was off to a terrific start on Friday and is set to establish a new opening weekend record for the month of March. According to BOXOFFICE.com's Early Weekend Estimates, Alice in Wonderland is on pace for $108 million this weekend.

Brooklyn's Finest is also doing well in its own right. The Overture release is on pace for a $13.8 million debut.

Thursday Afternoon Update (4:28 p.m. PT): As of 4 p.m. PT, MovieTickets.com is reporting that Alice in Wonderland is responsible for a dominant 90 percent of daily sales, while Avatar ranks second with four percent. Disney is reporting that AiW will be playing at 2,063 3D locations and 188 IMAX 3D locations.

Brooklyn's Finest is responsible for one percent, which is good enough to put it in a tie for third place with Half the Sky and Shutter Island.

Wednesday Afternoon Update (5:31 p.m. PT): This weekend, the latest Tim Burton/Johnny Depp collaboration and a new cop drama from the director of Training Day are entering the frame. As a result, Shutter Island's two-week run at #1 number will definitely come to an end.

Alice in Wonderland is poised to capitalize on the hunger for 3D films that Avatar created. In addition to the 3D factor, AiW has three other main strengths: 1) The name Disney above its title; 2) The fact that its based on a familiar property and 3) The trust that the Burton/Depp pairing has earned. Even though early word of mouth is mixed at best, the film is a no-brainer for family audiences. There's no question that AiW will top Valentine's Day to temporarily claim 2010's best opening weekend.

As of 4 p.m. PT, Fandango.com is reporting that AiW is responsible for a staggering 86 percent of daily sales.

Moviegoers are going online in droves to share their anticipation. "Alice in Wonderland has massive want-to-see levels, and traffic that is now pacing only about 10 percent behind Avatar prior to its opening in December," says John Singh, a spokesperson for Flixster when discussing activity on the popular Web site.

Expect Alice in Wonderland to debut to $81.5 million from around 3,400 locations.

Fresh off the success of The Crazies, Overture will send Brooklyn's Finest out into the world. The cop drama should find a niche among adult moviegoers who aren't interested in the latest antics of Burton and Depp.

Brooklyn's Finest has yet to crack into the top five sellers list on Fandango.com, but it could pop up on Thursday as more moviegoers begin to plan for the weekend.

Expect Brooklyn's Finest to post a debut haul of $12.5 million from around 1,800 locations.

Shutter Island will end up taking a considerable hit this weekend, but the $100 million plateau is not far off. The Paramount release should reach that mark by early next week.