Sunday Morning Update (8:47 a.m. PT): Disney is reporting that Alice in Wonderland has raked in an estimated $62 million domestically during its sophomore frame. In addition, the Tim Burton/Johnny Depp collaboration posted $76 million abroad, pushing its worldwide haul to an estimated $430 million.

Green Zone debuted to $14.5 million, while Remember Me grabbed $8.3 million. 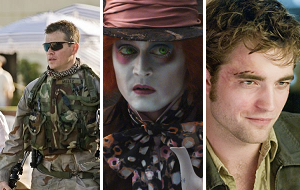 Saturday Morning Update (9:19 a.m. PT): According to BOXOFFICE.com's Early Weekend Estimates, Alice in Wonderland is on pace for a solid $57 million during its sophomore frame.

The weekend's four new wide releases are posting mixed results: Green Zone is on pace for $14.5 million, She's Out of My League should bring in $10.2 million, Remember Me is set for $9.5 million and Our Family Wedding looks to open to the tune $7.5 million.

Thursday Afternoon Update (3:52 p.m. PT): As of 3 p.m. PT, Fandango.com is reporting that Alice in Wonderland still has a dominant hold over the world of online sales with 63 percent of daily sales.

Out of the four new wide releases hitting theaters this weekend, Remember Me is selling the most tickets online. As of 3 p.m. PT, Fandango is reporting 10 percent of daily sales for the Summit release

Green Zone accounts for a respectable five percent of daily sales on Fandango.

Both She's Out of My League and Our Family Wedding have failed to crack into the top five.

Wednesday Afternoon Update (4:43 p.m. PT): This weekend, Disney's Alice in Wonderland will have to fend of four new competitors. Green Zone, Remember Me, She's Out of My League and Our Family Wedding are all headed for wide release.

Alice in Wonderland is coming off a record-breaking opening weekend haul of $116.1 million, which means that even a steep drop will result in an incredibly healthy gross.

Even though a lot of critics were not kind to the film, general audiences seems to be enjoying it for the most part. Tim Burton's flick has a 76 percent approval rating on Flixster, giving it the best response of any 2010 release.

The Disney flick is still dominating the world of online ticketing. As of 4 p.m. PT, MovieTickets.com reporting that AiW is responsible for 74 percent of daily sales, while Fandango.com is reporting 69 percent.

Expect Alice in Wonderland to rake in another $51 million during its sophomore frame, which means that it has a shot at hitting the $200 million plateau this weekend.

Universal has wisely decided to play down the fact that Green Zone focuses on the war in Iraq. The studio is obviously hoping that fans of the Bourne series will show up based on the teaming of Paul Greengrass and Matt Damon without asking too many questions. While this strategy is good for the opening weekend, there may be a backlash when moviegoers discover the film's political elements.

As of 4 p.m. PT, Green Zone accounts for three percent of daily sales on MovieTickets, but the war flick has yet to crack the top five on Fandango.

Green Zone should grab $17.5 million from around 2,900 theaters this weekend.

Summit is hoping that Twilight fans will follow Robert Pattinson to Remember Me. The romantic drama represents a big test for the young actor. If it fails, then Pattinson may be labeled as an actor who isn't capable of moving past an iconic role. If it does well, he can be comforted by the fact that a healthy career awaits him after the Twilight franchise comes to an end.

If online signs are any indication, it looks as though the Twilight base is prepared to follow Pattinson.

"The greatest overall activity [on Flixster] out of all the new releases is coming from Remember Me, which has engaged a rabid audience of younger females-who almost exclusively show interest in the Robert Pattinson romantic drama," says John Singh, a spokesperson for the popular Web site. "All other audience demographics appear to show little interest in the movie, but the interest from under-25 females is really, really strong."

As of 4 p.m. PT, Fandango is reporting that Remember Me is responsible for eight percent of daily sales, while MovieTickets is reporting five percent.

Paramount has given She's Out of My League a healthy marketing blitz, which will help it post respectable numbers even though its cast lacks major box office draws. Star Jay Baruchel is poised to reach new heights in 2010. He lent his voice to DreamWorks Animation's How to Train Your Dragon and he'll be appearing opposite Nicolas Cage in The Sorcerer's Apprentice. She's Out of My League may end up being seen as a kind of stepping stone for the young actor.

Fox Searchlight's Our Family Wedding will have to settle for a modestly-sized audience during an extremely crowded weekend. It will face direct competition from Remember Me for the attention of female moviegoers, and dating couples may be more enticed by She's Out of My League.

Expect Our Family Wedding to open with $8 million from around 1,500 locations.