Sunday Morning Update (9:25 a.m. PT): Disney is reporting that Alice in Wonderland tacked on an estimated $34.5 million this weekend. 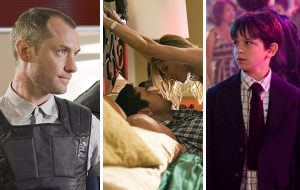 Diary of a Wimpy Kid debuted to $21.8 million, while The Bounty Hunter took in $21 million.

Repo Men landed with a thud in fourth place. The sci-fi thriller only did $6.2 million.

Saturday Morning Update (9:41 a.m. PT): Alice in Wonderland will take the #1 spot for the third weekend in a row. We're projecting a $34.5 million haul.

Diary of a Wimpy Kid should grab $23.5 million, while The Bounty Hunter looks to be on pace for $22 million.

Repo Men is a dud. It will only make around $6 million.

Thursday Afternoon Update (5:49 p.m. PT): As of 5 p.m. PT, MovieTickets.com is reporting that Alice in Wonderland is still dominating online sales with 47 percent of daily sales.

Diary of a Wimpy Kid is selling quite well online. MovieTickets reports that it's responsible for an impressive 25 percent of daily sales as of 5 p.m. PT.

The Bounty Hunter has failed to make a significant impact on the ticketing site. The romantic comedy/action flick delivered only five percent of daily sales.

Wednesday Afternoon Update (4:58 p.m. PT): This weekend, The Bounty Hunter, Diary of a Wimpy Kid and Repo Men are invading theaters with the goal of knocking Alice in Wonderland off its pedestal. Unfortunately for those three films, AiW's momentum is still quite strong, which means that it will almost certainly spend its third straight weekend on top of the box office.

It won't be long before Alice in Wonderland hits the $300 million mark domestically. The film is a massive success for Disney, Tim Burton, Johnny Depp and the 3D format. AiW proves that Avatar really made audiences hungry for more 3D. How to Train Your Dragon and Clash of the Titans are the next two releases that are poised to profit from the desire for films.

AiW is still dominating the world of online sales. As of 4 p.m. PT, MovieTickets.com is reporting that the Disney flick is responsible for a healthy 54 percent of sales, while Fandango.com is reporting 43 percent.

Alice in Wonderland should be able to add another $37 million to its domestic haul this weekend.

The Bounty Hunter will try to follow in the footsteps of Mr. and Mrs. Smith. Just like Mr. and Mrs. Smith, The Bounty Hunter combines romance with plenty of action scenes. The success of the film largely depends upon whether or not moviegoers will believe Jennifer Aniston and Gerard Butler as a couple. If the duo has genuine chemistry, then returns could be healthier than expected.

There is still a strong possibility that Bounty Hunter could post underwhelming numbers. Both Aniston and Butler are far from sure things at the box office. Despite finding success with Marley & Me and He's Just Not That Into You, Aniston hit tough times with Management and Love Happens as of late. As for Butler, he was unable to carry Gamer on his own.

"Bounty Hunter is skewing strongly female, though there actually is a decent among of interest from younger males, which means it could be a popular date-night choice," says John Singh, spokersperson for Flixster, when discussing the level of activity the film is generating on the popular Web site. "Bounty Hunter has quite promising want-to-see numbers, in general."

As of 4 p.m. PT, Fandango is reporting that The Bounty Hunter has failed to break into the top five daily sales list, but it does account for four percent of sales on MovieTickets. That's bound to change tomorrow as more moviegoers make plans for the weekend. If it doesn't change, then that could mean bad things for the romantic comedy.

Look for The Bounty Hunter to bring in $26.5 million from 3,000 locations during its debut frame.

Diary of Wimpy Kid is starting out with a strong base thanks to its source novels, but it will need to bring in more than loyal readers to be a hit. The film will obviously have a very specific appeal to pre-teen boys, which means that it's certainly not cut out to be a four-quadrant hit by any means.

Surprisingly, Wimpy Kid is responsible for 24 percent of daily sales as of 4 p.m. on Fandango.com, and 15 percent on MovieTickets.com. That's a solid number to be sure, but it can also be attributed mainly to a rush of loyal fans.

Expect Diary of a Wimpy Kid to post a $13 million debut haul from 3,100 locations.

Repo Men doesn't appear to have much of a pulse. Even though Universal has provided the sci-fi flick with a decent marketing push, audiences don't seem to be responding.

"Repo Men is seeing Flixster activity and interest levels that are on the low side, although it has picked up a little bit in the past week in both direct searches and pageviews. The futuristic thriller seems to be having difficulty finding footing against formidable competition," says Singh.

The Jude Law vehicle did not break into the top five on either Fandango or MovieTickets as of 4 p.m. PT.

Repo Men may manage a paltry $8 million from 2,450 locations this weekend.