Universal's Robin Hood will try to do some damage at the box office when it hits theaters in May.

This week, we've added Robin Hood and Letters to Juliet to our Anticipation Index. Both films are scheduled to hit theaters on May 14. 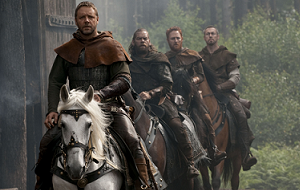 Russell Crowe and Ridley Scott have teamed up for the fifth time to bring audiences their take on a classic character. The relationship has been mostly successful thanks to hits such as Gladiator and American Gangster. However, there was A Good Year, which grossed a paltry $7.5 million domestically. Crowe's star power is certainly dropping quickly, but it looks as though that thanks to a prime release date and the power of an established property, Robin Hood will definitely give him a much needed hit.

Amanda Seyfried is quickly becoming a bankable leading lady. Dear John was the first movie topple Avatar, and it has banked nearly $80 million since opening in February. Summit is hoping that Letters to Juliet will be able to perform as well. The romantic flick should serve as a nice bit of counterprogramming to Iron Man 2 and Robin Hood.

Check out our predictions for Robin Hood and Letters to Juliet as well as other films in the table below.