The Shrek franchise takes a leap into the 3D world this May with Shrek Forever After, the fourth film in the franchise.

This week, we've added Shrek Forever After and MacGruber to our Anticipation Index. Both films are scheduled to hit theaters on May 21. 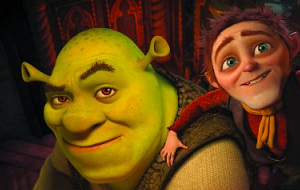 Even though the last Shrek film was met with mixed word of mouth, it still became a solid $322.7 million domestic hit. The franchise has plenty of strength, and the fact that the latest installment is in 3D will only bolster its grosses. Expect Shrek Forever After to outperform its predecessor.

MacGruber was originally set to be released on April 23, but it now has a much better summer release date. The Saturday Night Live spinoff should serve as a nice little bit of counterprogramming to Shrek Forever After. Even though SNL movies are hit-and-miss at the box office, MacGruber looks promising thanks to a genuinely funny trailer. The film's success largely depends on moviegoers who aren't familiar with the skits taking a chance on it.

Check out our predictions for Shrek Forever After and MacGruber as well as other films in the table below.