UPDATED: Weekend Estimates: 'Why Did I Get Married Too?' and 'The Last Song'

Clash of the Titans, Tyler Perry's Why Did I Get Married Too? and The Last Song are all doing well. 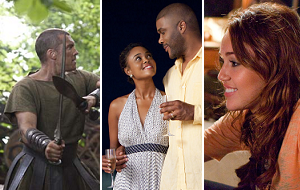 Saturday Morning Update (7:43 a.m. PT): According to studio estimates, Clash of the Titans raked in $26.360 million on Friday, which includes midnight screenings. The Warner Bros. release was able to post $2.655 million from its Thursday shows. Titans is on pace for a $63 million weekend.

Tyler Perry's Why Did I Get Married Too? is set for a debut of $28 million, and The Last Song looks to be on pace for $16.5 million over the weekend.

Friday Morning Update (9:09 a.m. PT): Clash of the Titans is off to a solid start with an estimated $4.2 million from Thursday night and midnight screenings.

Thursday Afternoon Update (4:16 p.m. PT): As of 4 p.m. PT, Fandango.com is reporting that Clash of the Titans is responsible for 46 percent of daily sales, while MovieTickets.com is reporting 41 percent. It will be interesting to see how well Titans performs during advance screenings and midnight shows. It could post as much as $3.5 million before the weekend rush begins.

The Last Song is responsible for 16 percent of daily sales on Fandango, and 10 percent on MovieTickets. The Disney release is already off to a promising start with more than $5 million in the bank from Wednesday.

Tyler Perry's Why Did I Get Married Too? boasts 15 percent of daily sales on MovieTickets, and 14 percent on Fandango.

Thursday Morning Update (11:57 a.m. PT): The Last Song was able to grab an impressive $5.125 million on Wednesday, which means that it could end up with $25 million total by the end of the holiday weekend. Check back later this afternoon for our final prediction.

Wednesday Afternoon Update (4:59 p.m. PT): This weekend, Clash of the Titans, Tyler Perry's Why Did I Get Married Too? and The Last Song will be competing for the attention of moviegoers. Meanwhile, How to Train Your Dragon will try to maintain a healthy portion of its audience after a slightly underwhelming debut.

There's no doubt that Clash of the Titans will finish in first place this weekend. Even before it was converted to 3D, the action extravaganza was set to post dominant numbers.

Warner Bros. is obviously hoping that Titans will mimic the success of 300, which the studio launched to a $70.9 million domestic opening in March 2006. While 300 was a pleasant surprise, Titans will be expected to perform well right from the beginning.

A handful of early reviews are trashing the 3D conversion that Titans went through. Such bad publicity could end up taking a decent chunk out of the film's 3D haul if moviegoers opt for the 2D version instead. It also doesn't help that there's a genuine battle for 3D theatrical space being waged by Titans, Dragon and Alice in Wonderland.

Still, all negative 3D press aside, Warner Bros. must be confident in their product, because they are offering up screenings starting at 10 p.m. on Thursday in addition to the normal midnight shows.

As of 4 p.m. PT, Fandango.com is reporting that Titans is responsible for 23 percent of daily sales. That's a very solid Wednesday number, and its bound to increase as more moviegoers plan for the weekend.

Expect Clash of the Titans to post a debut haul of $68 million from 3,500 locations.

At this point in his career, Tyler Perry has established an incredibly loyal fan base, and there's no reason to expect that his base won't show up for this latest venture.

Perry is coming off a incredibly successful year in 2009. The multihyphenate released two films: Madea Goes to Jail in February and I Can Do Bad All by Myself in September. Madea Goes to Jail became Perry's most financially successful work to date with a $41 million opening and a $90.5 million cume, while Bad All by Myself opened to a solid $23.4 million in September. Perry should have no problem carrying that momentum into Married Too?. The only potential drawback is that Married Too? is a sequel, which means that Perry may not pick up many new converts this time around.

As of 4 p.m. PT, Fandango.com is reporting that Married Too? is responsible for a solid seven percent of daily sales. That's a healthy figure considering the strength of the films that the Lionsgate release is competing against.

Tyler Perry's Why Did I Get Married Too? should post an opening haul of $21 million from 2,000 locations.

The Last Song represents a major test for star Miley Cyrus. If it succeeds, then the young actress/singer will be able to take on more mature roles and hopefully build a lasting career. If it fails, critics and other naysayers will be quick to label her as a washed-up teen sensation. Luckily, Cyrus still has the Disney marketing machine in her corner. It also doesn't hurt that the film is scripted by Nicholas Sparks (The Notebook, Dear John). Sparks has carved out quite a niche for himself in the "chick flick" genre.

Not surprisingly, The Last Song, which opened today, dominated daily sales on Fandango with a whopping 46 percent as of 4 p.m. PT. That number should drop as Clash of the Titans begins to surge.

How to Train Your Dragon should hold up quite well this weekend despite a rush of competition. The Paramount/DreamWorks Animation effort snagged an A rating from Cinema Score and it currently boasts a 97 approval rating on Rotten Tomatoes. There's no question that the buzz is glowing.

Expect How to Train Your Dragon to tack on another $28.5 million during its sophomore frame.